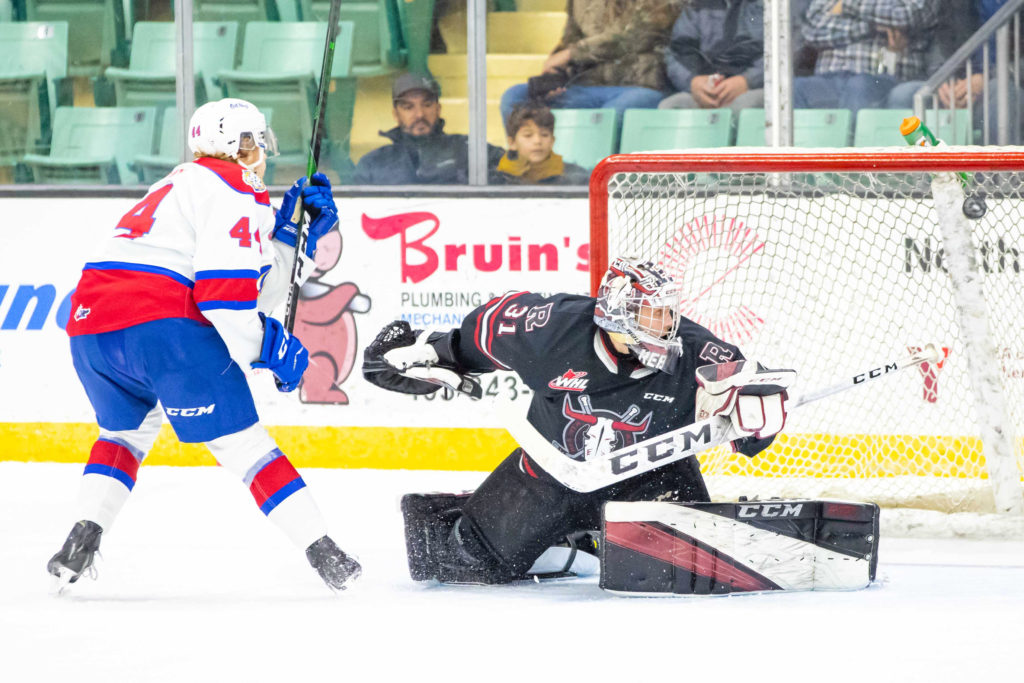 After a shootout loss to the Lethbridge Hurricanes a night prior, Beck Warm was hungry for redemption.

He got that in spades on Saturday night in Red Deer.

For the second straight night Warm was focused and impactful, and this time was rewarded with a pair of points as he improved his record as an Oil King to 10-2-0-2 en route to his third shutout of the season and fifth of his WHL career.

The Oil Kings opened the scoring at 8:02 of the first period on the power play when Sawchuk one-timed a pass from Matthew Robertson for his 24th of the season.

With less than eight minutes remaining in the period and the Rebels enjoying a man advantage of their own, it was Scott Atkinson who earned a shorthanded breakaway but was turned aside by Anders. Play then shifted to the other end with the Rebels producing a quality scoring chance, but were stopped by Warm.

In the closing minutes of the period, Souch was awarded a penalty shot and after some nice stickhandling roofed the puck from the backhand into the top right corner to give the Oil Kings a 2-0 lead at 2:52.

Shots on goal in the opening frame favoured Edmonton, 14-6.

With just under nine minutes left in the second, Red Deer got one of their best offensive chances of the frame on a breakaway opportunity, but again they were denied by the hot hand of Warm.

The second period proved to be a scoreless stalemate, with the Oil Kings once again commanding the shot clock, 13-10.

In the third, Guenther took a pass from Jake Neighbours along the boards then darted to the net, outlasting Anders for his 26th of the season to make it 3-0 at 15:20.

The Oil Kings rounded out the game’s scoring on a relentless effort by Kope, who was fed in the neutral zone by Sawchuk and skated towards an empty Red Deer net, stickhandling the puck all the way to the blue paint before registering his 13th of the season at 18:31.

Red Deer was 0-for-5 on the power play, while Edmonton was 1-for-2 with the man advantage.

The Oil Kings next game is back at Rogers Place in a mid-week meeting with the Spokane Chiefs on Wednesday, March 4 at 7:00 PM MT.