Warm shines in Lethbridge despite Oil Kings earning a single point vs. Hurricanes 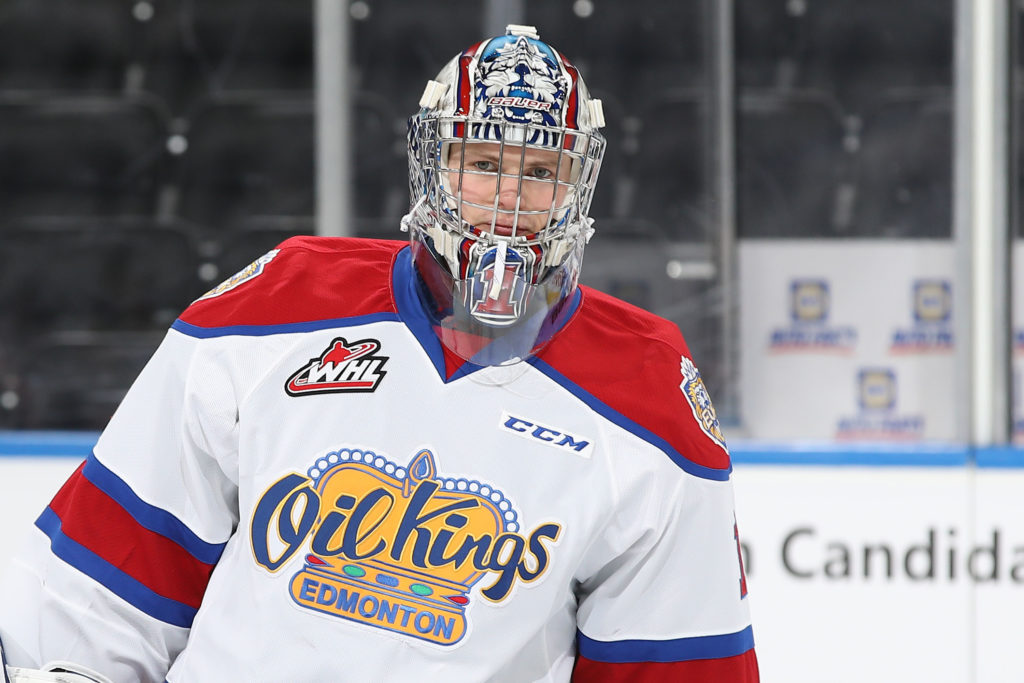 It was a back-and-forth affair in a meeting between the top two teams in the Central Division, but the Edmonton Oil Kings ended up on the wrong side of the four-point game.

Despite a first period deficit and trailing in shots on goal for the duration of the night, the Oil Kings managed to take two leads and were constantly in a position to gather two regulation points in large part due to the play of starting goaltender, Beck Warm.

Warm, (18-16-3-3) on the season and (9-2-0-2) as an Oil King, was a difference-maker for Edmonton throughout the night, especially in the latter two periods of regulation play when he kept his squad in the game with a number of timely, athletic stops; 32 of 36, all totaled.

The Hurricanes opened the game’s scoring at 11:29 of the first period with Brett Davis’ first of the night.

But the Oil Kings squared things up before the end of the frame, as defenceman Wyatt McLeod barreled off the bench and tricked Lethbridge goaltender Carl Tetachuk for his second of the season to tie the game, 1-1, with just 16 seconds left at 19:44, from Carter Souch and Matthew Robertson.

Shots on goal in the first period favoured Lethbridge, 13-8.

In the second, with the Oil Kings enjoying one of their two man advantages of the night, an initial shot by Dylan Guenther produced a rebound that was tapped home by Ethan McIndoe for his 16th of the season – tying his previous career high for goals in a season – giving the Oil Kings their first lead of the night, 2-1, at 3:49 with Robertson picking up the second assist.

With just under eight minutes gone in the second, and the teams playing 4-on-4 hockey after coincidental minors, Warm stood tall with a pair of saves in an integral sequence to maintain the one goal lead.

The Hurricanes capitalized on a power play opportunity of their own – one of their five on the night – as Dylan Cozens made it a 2-2 game at 12:09 which rounded out second period scoring and set up a riveting remainder of the night.

Lethbridge once again commanded the shot clock in the second period, 10-6, for a two-period total of 23-14.

In the third, a punishing wrist shot by Jake Neighbours restored the lead for the Oil Kings, 3-2, from Riley Sawchuk and Ethan Cap just 20 seconds after puck drop.

Edmonton was whistled for roughing and boarding just 20 seconds apart at the 6:36 and 6:56 marks, respectively, giving Lethbridge a 1:40 minute, 5-on-3 man advantage but the team managed to kill it off in large part due to Warm, who made both a massive blocker save and a huge glove save in the dying seconds of the two-man advantage.

However, the Hurricanes were the next to strike as Davis tallied his second of the night at 13:04 to once again make it a stalemate at 3-3.

Four minutes later the Oil Kings once again took charge, despite trailing on the shot clock, and reclaimed the lead, 4-3, on a great effort by Vladimir Alistrov.

The Belarus native pick-pocketed the puck in the defensive end and surged into the defensive zone on a 2-on-1 before outlasting Tetachuk on the short-side to make it 4-3, Edmonton. The goal came unassisted at 17:07.

It seemed as if it were the goal the Oil Kings needed to secure a pair of points, but with Tetachuk pulled in favour of an extra attacker the Hurricanes would once again tie the game, 4-4, with 53 seconds remaining in regulation.

The Oil Kings commanded play in the 3-on-3, five-minute overtime period, but the game eventually made its way to a shootout.

The Hurricanes shot first, with Brett Davis and Alex Cotton both registering goals.

The Oil Kings sent Dylan Guenther and Jake Neighbours to the line, both of who were denied by Tetachuk.

Shots on goal in the third period were 12-10 Lethbridge, and 3-1 Edmonton in the overtime frame for a game total of 36-27, Hurricanes.

Lethbridge was 1-for-5 on the power play, while Edmonton was 1-for-2 with the man advantage.

Their next game at Rogers Place is a mid-week meeting with the Spokane Chiefs on Wednesday, March 4 at 7:00 PM MT.