Warriors battle back to defeat Oil Kings in OT 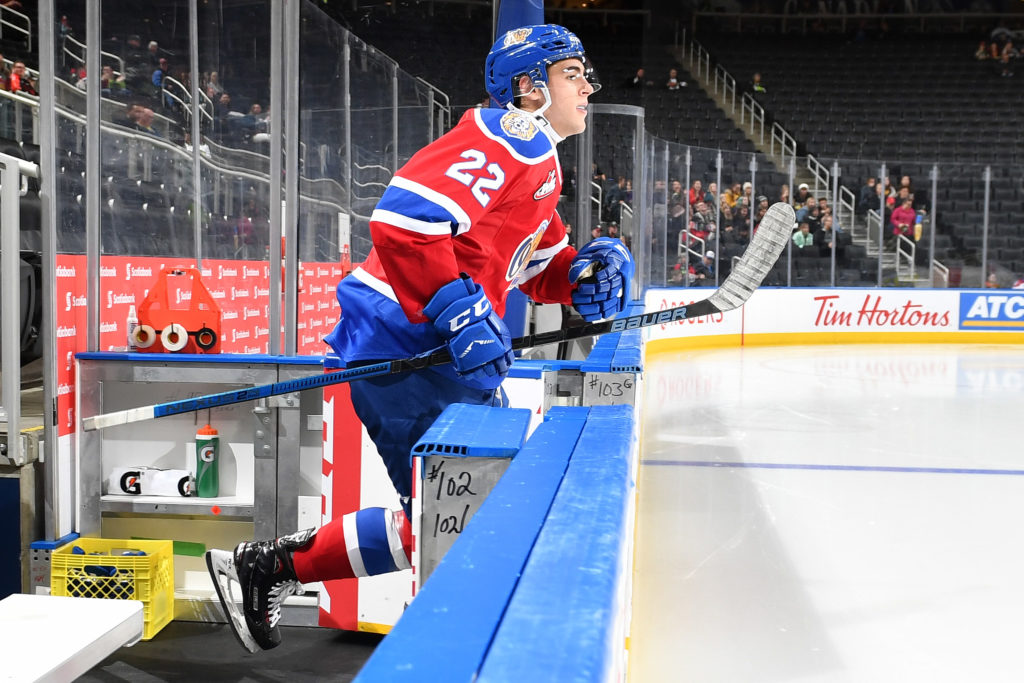 The Edmonton Oil Kings (14-8-2-2) held three leads on Friday night, but the Moose Jaw Warriors (11-5-3-1) first lead of the night earned them their 11th win of the season as the Warriors rallied to a 4-3 overtime victory in front of 3,103 fans at Mosaic Place.

Edmonton’s Trey Fix-Wolansky picked up a goal and two assists to give him 51 points in 26 games, maintaining his lead in the WHL’s overall scoring race.

The Oil Kings took a 1-0 lead on the stick of their captain, Fix-Wolansky, who tallied his 15th of the season just 22 seconds into the game, from Matthew Robertson and Brett Kemp.

They maintained that 1-0 edge for the majority of the opening frame until Tristin Langan made it a 1-1 game with just 26 seconds left in the period, from Brayden Tracey and Josh Brook, to send the game into the first intermission.

Shots on goal in the first period of play were even at 7-7.

The Oil Kings regained the lead near the midway point of the second period when Robertson registered his second point of the night and third goal of the season to make it 2-1 Edmonton, from Fix-Wolansky, at 8:36.

It would stand as the lone goal of the period as the Oil Kings outshot the Warriors by a slim 11-10 margin for a two-period total of 18-17.

Justin Almedia once again evened things up for the Warriors, making it a 2-2 game with a nifty, shorthanded goal to pick up his fourth of the season – from Langan and Daemon Hunt at 3:19 of the third period.

Vince Loschiavo regained the lead for the Oil Kings as he finished off a pretty passing play with Quinn Benjafield and Fix-Wolansky while on the power play for his 12th goal of the season, giving Edmonton a 3-2 lead just 49 seconds later at 4:08.

But with four minutes left the Warriors answered again, as Josh Brook’s shot from the point was tipped in front by Kaden Taphorn, his second of the season, to make it a 3-3 game at 15:55 with Tate Popple earning the secondary assist, sending the game to overtime.

Just under two minutes into the 3-on-3 extra time, Langan notched his second goal and third point of the night, capitalizing on a wide-open opportunity in front of Myskiw to give the Warriors the 4-3 win.

Shots on goal were 14-8, Edmonton in the third period and 2-0 Moose Jaw in overtime.

Moose Jaw was held without an opportunity on the power play while Edmonton finished the night going 1-for-4 with the man advantage.

The Oil Kings are back in action tomorrow night, Saturday, November 24 when they take on the Swift Current Broncos for a 6:00 PM MT (7:00 PM CT) start. They return to Rogers Place Wednesday, November 28 when they host the CHL’s top ranked Prince Albert Raiders at 7:00 PM MT.