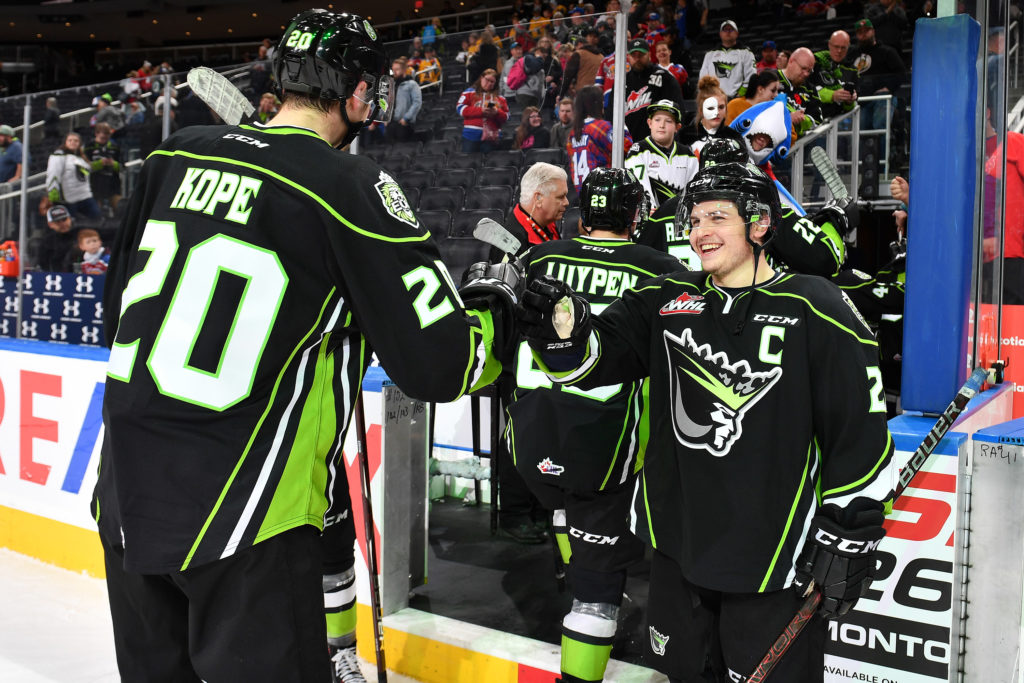 Trey Fix-Wolansky followed up a three-point night on Saturday with his fourth four-point performance of his WHL career – and first of the season – to help lead the Edmonton Oil Kings (9-7-0-1) to a 6-3 win over the Lethbridge Hurricanes (7-5-1-2) in front of 5,754 fans at Rogers Place on Sunday evening.

The victory caps off a 3-0-0-0 three-in-three weekend for the Oil Kings, with Fix-Wolansky amassing a total of nine points (2G, 7A) during that span.

But the Oil Kings’ captain wasn’t the only one contributing offensively over the course of the team’s now four consecutive victories. Overager Quinn Benjafield notched his third straight two-point game, and second straight game scoring each a power play and a shorthanded goal. He registered six total points during the three-game weekend, and is currently riding a four-game point streak (5G, 3A).

Boston Bilous (3-2-0-1) capped off the weekend in goal for the Oil Kings after Dylan Myskiw got the start the previous two nights. It was the first start for Bilous since October 19, turning aside 21 Hurricanes shots for his third win of the season.

Jake Neighbours also had a big night on the scoresheet, as the winger continued his steady climb up the League’s rookie scoring race. He added a pair of goals and an assist for a three-point effort, sitting him just one point back (5G, 9A = 14 points) of Seattle’s Andrej Kukuca (4G, 11A = 15 points) for the highest point total by a freshman.

But on the same Hurricanes power play Lethbridge capitalized and it was a 1-1 game just 29 seconds later, as an odd bounce deflected past Bilous and credited to Dylan Cozens for his eighth of the season. Calen Addison and Taylor Ross picked up the assists at 3:51.

After a nice feed from Liam Keeler, David Kope tallied his second of the season, regaining the lead for Edmonton, 2-1, at 8:05 to close out first period scoring.

Shots on goal in the opening frame favoured the Oil Kings, 9-7.

Just 1:44 into the second period it was 3-1 Edmonton as Fix-Wolansky fired the puck onto the Lethbridge goal and it sat, uncovered, in the blue paint. Neighbours pounced on the loose puck to pick up his fourth of the season with Conner McDonald picking up the other assist.

Neighbours followed that up with his second of the game to make it 4-1 Oil Kings, with Fix-Wolansky picking up another assist, at 13:51.

Following suit yet again to last night, Benjafield added his second of the game by way of the power play, pouncing on his own rebound with assists from Neighbours and Robertson, putting Edmonton up 5-1 at 16:19 to round out scoring through 40 minutes.

In the third period, Fix-Wolansky earned his fourth point of the game with his eleventh goal of the season, from Jalen Luypen to make it 6-1 Oil Kings at 14:50.

The Hurricanes added a pair of goals just 18 seconds apart by Taylor Ross and Jake Elmer, but it was as close as they would come to closing the gap as the Oil Kings skated to the 6-3 win.

Shots on goal were 22-17, Edmonton after two periods of play, and 30-24 Oil Kings at the end of regulation.

Lethbridge finished the night going 1-for-5 on the power play, while Edmonton was 1-for-3 with the man advantage along with a shorthanded goal.

The Oil Kings next action is on the road as they face the Regina Pats on Friday, November 2 at 7:00 PM MT at the Brandt Centre. They’ll play six straight away from home before returning to Rogers Place on November 17 when they host the Kelowna Rockets at Rogers Place at 7:00 PM MT.