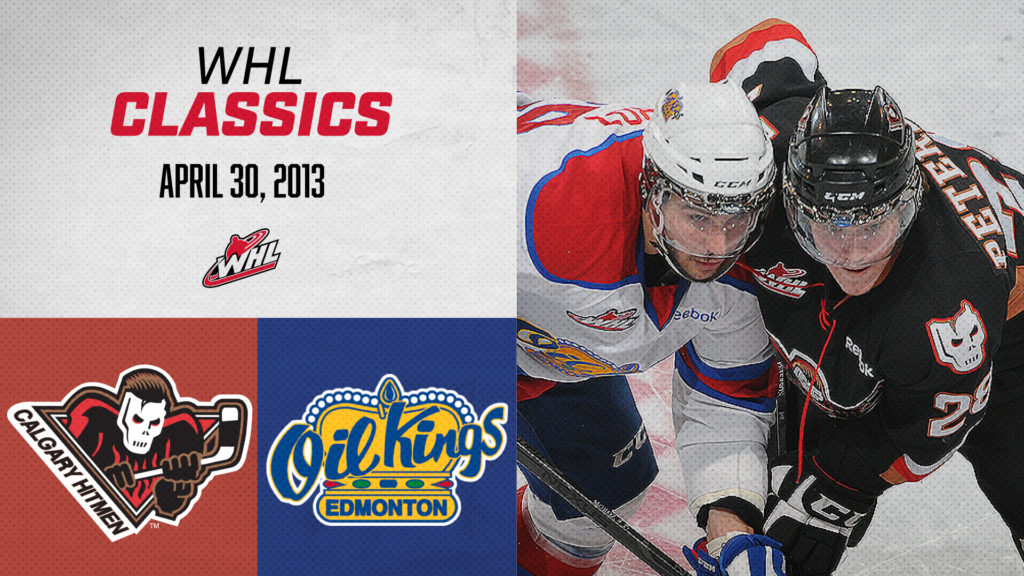 Albertan pride is on the line Wednesday night from the provincial capital on WHL Classics.

The Edmonton Oil Kings will host the Calgary Hitmen for one more time as the 2013 Eastern Conference Championship goes the distance to a seventh game.

In the true spirit of a back-and-forth series, they split the Games 1 and 2 in Edmonton, split Games 3 and 4 in Calgary, and each defended home turf in Games 5 and 6 to set up the winner-take-all match-up.

Leading the charge for the Hitmen, Victor Rask has scored twice against the Oil Kings in the series and will be looking to add to his team-leading 16 points (6G, 10A). Also on the rise, Brooks Macek has scored in three-straight games including a pair of goals in Game 6 that included the game-winning goal in overtime. He’s already tied his career-best mark for goals in a single WHL Playoffs with six and will be a threat to score in the final game of the series.

Also scoring in Game 6 was Brady Brassart, giving him three goals in the series and nine in the WHL Playoffs. Earlier on in the 2013 WHL Playoffs, he tallied a pair of hat tricks to boost his club and could be one of the players to provide a game-changing moment. Captain Cody Sylvester has also provided a boost with 12 points (4G-8A) as the end of his WHL career draws near, win or lose.

Supporting the home side, Michael St. Croix is looking for another moment to shine. The 20-year-old has evolved into the heart and soul of the Oil Kings’ success in Edmonton since he scored in his first-ever WHL game on January 9, 2009. The first Oil King to ever reach or surpass the 100-point mark in a single season, St. Croix will be looking to help the Oil Kings through another must-win game to extend their season.

The Oil Kings continue to boast a number of other strong offensive contributors in Stephane Legault, Henrik Samuelsson, Trevor Cheek, and Martin Gernat, who all sit within five points of the team scoring lead entering tonight’s game. Legault has contributed five points (1G, 4A) in the series so far and will hope to be a factor once again. In the case of Samuelsson, he found the scoresheet in the first five games of the series, but was held off of it in Game 6. He could be another offensive factor for the Oil Kings if they’re to advance.

Between the pipes, it’ll be Laurent Brossoit once again taking to the crease for the Oil Kings while Chris Driedger tends to the pipes for the Hitmen.