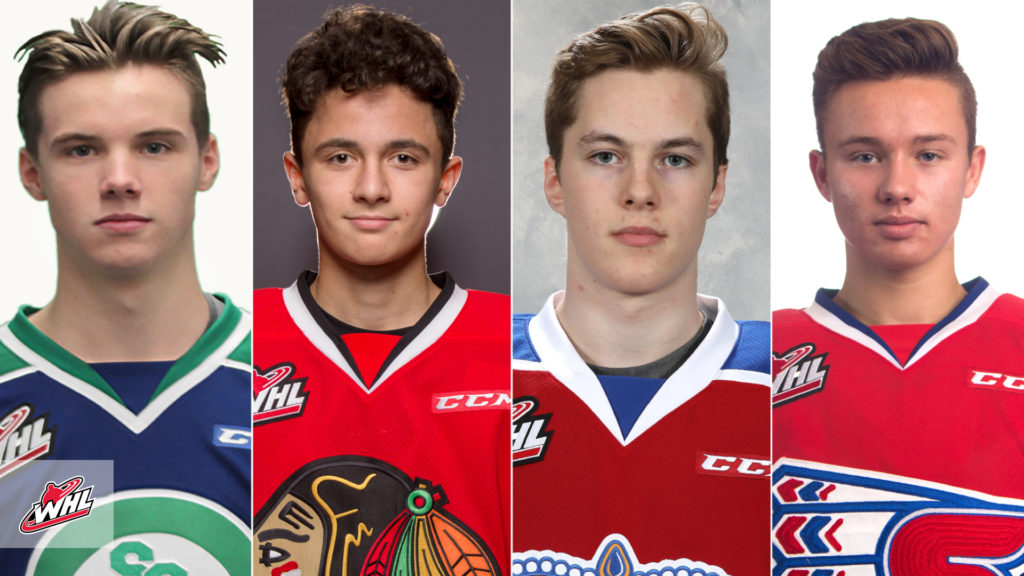 Opening the night with the Edmonton Oil Kings’ first goal, Logan Dowhaniuk also earned his first career WHL goal 4:28 into the second period. Dowhaniuk attempted to toe drag the puck around a Regina Pats defenseman when he lost control, but quickly picked up the bobbled puck to put it in the net.

In a high scoring game between the Calgary Hitmen and Medicine Hat Tigers, Tye Carriere was successful in scoring his first career WHL goal 9:34 into the second period. With a pass from behind the net from Riley Fiddler-Schultz to Carriere who was perfectly positioned in the front of the net, he was able to snap it past Medicine Hat to score.

A 7-3 win for the Portland Winterhawks over the Victoria Royals provided Haydn Delorme the opportunity to score his first career WHL goal 19:55 into the third period on Victoria’s empty net. After an attempted shot on the empty net by Michal Kvasnica was blocked, Delorme rushed to settle the puck and tap it in, sealing the win for Portland.

An odd-man rush in the Edmonton Oil Kings’ favour resulted in Jalen Luypen scoring his first career WHL goal on a pass from Trey Fix-Wolansky. At 17:31 in the second period, Luypen scored the first Edmonton Oil Kings goal of the game against the Swift Current Broncos who would eventually go on to defeat Edmonton 4-3 in overtime.

This win for the Broncos also secured Isaac Poulter’s first career WHL victory after he stopped 42 shots against the Oil Kings.

Despite losing to the Everett Silvertips 6-2, Spokane Chiefs forward Cordel Larson persevered to score his first career WHL goal 1:13 into the third period. Capitalizing on a rebound in front of the net, Larson backhanded the puck past the Silvertips’ goaltender to score the first of two goals for Spokane.

Seeking revenge against the Calgary Hitmen after losing to them two nights before, Medicine Hat Tigers forward Corson Hopwo scored his first career WHL goal 6:24 into the game. Providing one of five goals for the Tigers, Hopwo blocked a shot at the blue line and used it to create a breakaway opportunity where he was able to sneak it past the Hitmen’s goaltender.

In a barn burner of a game between the Spokane Chiefs and Portland Winterhawks, rookie goaltender Dante Gianuzzi stepped into the game in the second period to stop seven shots for the Winterhawks earning his first career WHL victory. Gianuzzi`s success contributed to the 8-6 win for the Winterhawks.