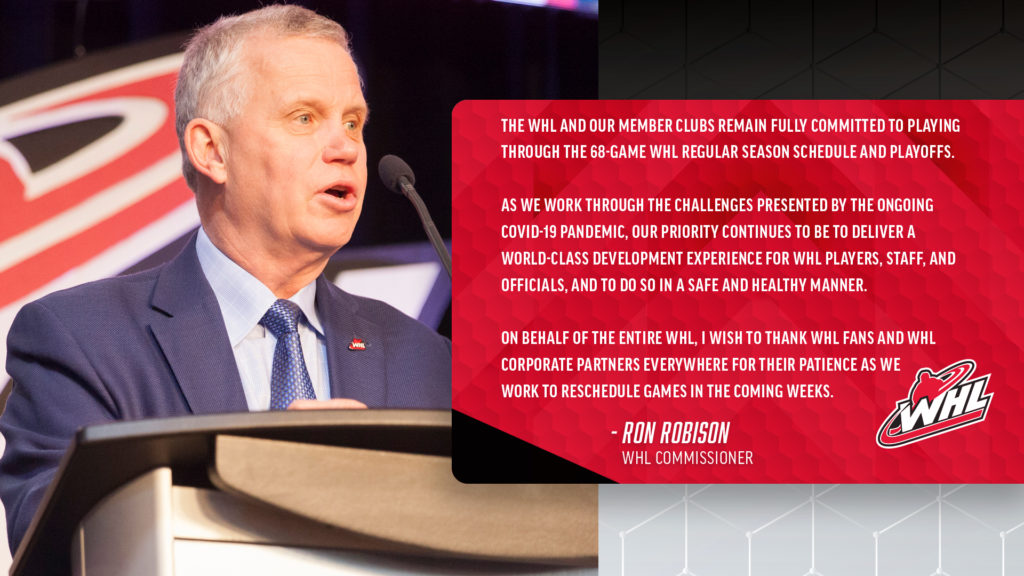 At this time, 15 Clubs have recently paused team activities as a result of multiple players and staff being added to the WHL COVID-19 Protocol List due to exhibiting symptoms or having tested positive for COVID-19.

“The WHL and our member Clubs remain fully committed to playing through the 68-game WHL Regular Season schedule and Playoffs,” commented WHL Commissioner Ron Robison. “As we work through the challenges presented by the ongoing COVID-19 pandemic, our priority continues to be to deliver a world-class development experience for WHL players, staff, and officials, and to do so in a safe and healthy manner. On behalf of the entire WHL, I wish to thank WHL fans and WHL corporate partners everywhere for their patience as we work to reschedule games in the coming weeks.”

The WHL is working in consultation with the WHL Chief Medical Officer regarding the matter concerning all Clubs currently paused. At this time, the following Clubs have paused all team activities, including on-ice practices and off-ice training, based on WHL COVID-19 Protocols:

As a result of the aforementioned WHL Clubs pausing team activities, the following eight (8) WHL Regular Season games have been postponed and will be rescheduled at a later date:

WHL Clubs are responsible for monitoring for symptoms of COVID-19 among players and hockey operations staff on a daily basis. Upon a player or hockey operations staff member exhibiting symptoms, the individual completes a rapid antigen test and isolates. If the rapid antigen test result is positive, the individual is sent for a PCR test to confirm the positive result and determine next steps.

The health and safety of all WHL participants is the top priority for the WHL. In order to reduce the risk of exposure to and transmission of COVID-19, the WHL requires all WHL roster players, hockey operations staff, and other team and League office personnel to be fully vaccinated against COVID-19 with a Health Canada approved vaccine.

About the Western Hockey League
Regarded as the world’s finest development league for junior hockey players, the Western Hockey League (WHL) head office is based in Calgary, Alberta. The WHL consists of 22 member Clubs with 17 located in Western Canada and five in the U.S. Pacific Northwest. A member of the Canadian Hockey League, the WHL has been a leading supplier of talent for the National Hockey League for over 50 years. The WHL is also the leading provider of hockey scholarships with over 375 graduates each year receiving WHL Scholarships to pursue a post-secondary education of their choice. Each season, WHL players also form the nucleus of Canada’s National Junior Hockey Team.