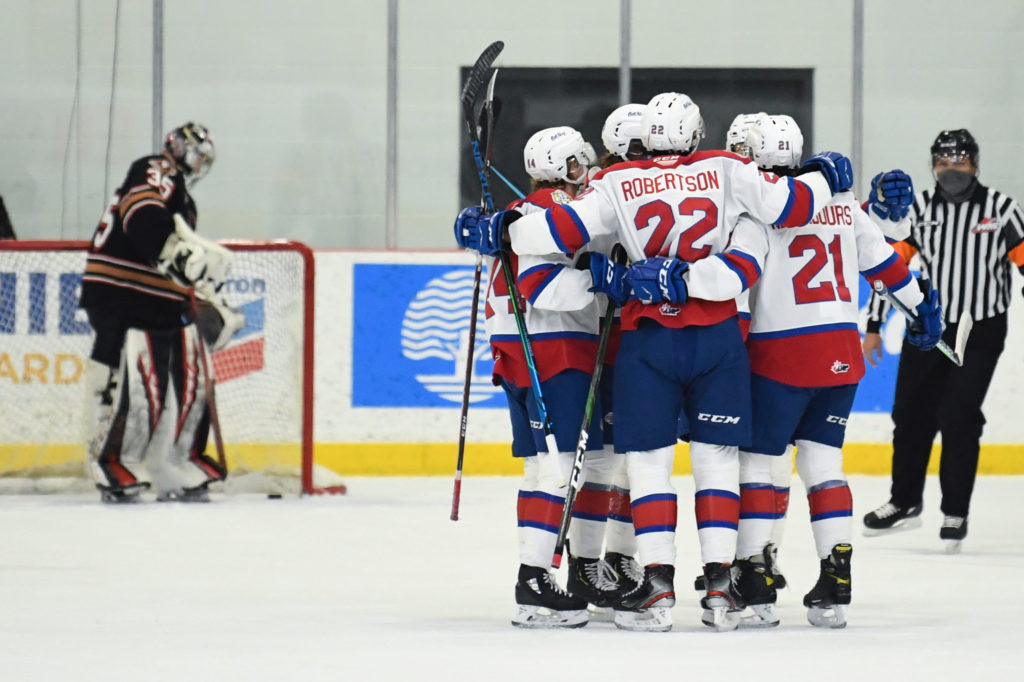 Calgary, AB – The Edmonton Oil Kings (18-1-0-1) stormed back from an early deficit to the Calgary Hitmen (9-8-2-0) to pick up a commanding 8-3 road win at the Seven Chiefs Sportsplex Friday night.

A wild first period in Calgary saw the Oil Kings and Hitmen exchange five goals in the opening 20 minutes with Josh Williams scoring a pair for the visitors and Matthew Robertson adding a power play marker.

The Hitmen opened the scoring less than a minute into the game after a pinching Luke Prokop fired a shot from a sharp angle off the pad of Sebastian Cossa to a waiting Adam Kydd in the slot, who drilled home the games opening goal. The Oil Kings answered back at the 4:28 mark with Williams first of the night and 13th of the year after Jake Neighbours stripped a Hitmen defender below the goal line and fed Williams in the right-wing circle where he would elevate a shot over the shoulder of Brayden Peters to even the score. The Oil Kings took their first lead of the night 4:16 later after Logan Dowhaniuk held the puck in at the blueline, handed off to Robertson, who tossed the puck onto the tape of Williams at the top of the right-circle, he’d cut to the slot on his backhand and flick the puck into the top shelf. Just 1:19 later the Hitmen had the game tied again after Riley Stotts created a breakaway for himself by blocking a shot just inside his own blueline and raced the length of the ice, slipping a shot five-hole on Cossa. The Oil Kings restored their lead just before the period was out after a penalty to Rory Neill of the Hitmen put the Oil Kings on the man-advantage. Williams and Neighbours worked the puck around up high in the Hitmen zone before spotting an open Robertson in the right-wing circle who charged to the slot and sliced a wrist shot past Peters to give Edmonton a 3-2 lead heading into the first intermission.

As offensively minded as the first period was, the second period was just the opposite. Both teams clamped down defensively and did a good job of clogging up the danger areas in their respective zones. With not a lot of room to operate, it looked as though the Oil Kings lead would remain at just one heading into the third period. However, with just under four minutes left in the frame, Ethan Cap was able to feather a wrist shot through a crowd in front of Peters from the left-point and between the Hitmen goaltender’s legs to give Edmonton a 4-2 lead after 40 minutes of play.

After giving up an early power play goal to Sean Tschigerl to open the third period, the Oil Kings would step on the gas and pull away from the Hitmen getting four goals in a span of 8:56. First, Jalen Luypen scored his 15th of the year on beautiful setup by Cap and Carter Souch. Caleb Reimer poured in his third goal of campaign with an unassisted marker, stepping into a loose puck in the slot and snapping a wrist shot home. Carter Souch snuck a short-side shot from the left-circle past Peters for his sixth goal of the season on an Oil Kings power-play. Finishing off the scoring was Williams as he was able to steer home a backhand from the left-wing circle off a rebound on another Edmonton man-advantage.

The Oil Kings finished the night 3-for-6 on the power-play, while the Hitmen went 1-for-3. Cossa stopped 22 of the 25 shots he faced for his 15th win of the season. The Oil Kings outshot the Hitmen 37-25

The Oil Kings are back in action Saturday night when they pay a visit to the Red Deer Rebels at 7 PM.