Ewanyk & Canada Settle For 4th At World U-18 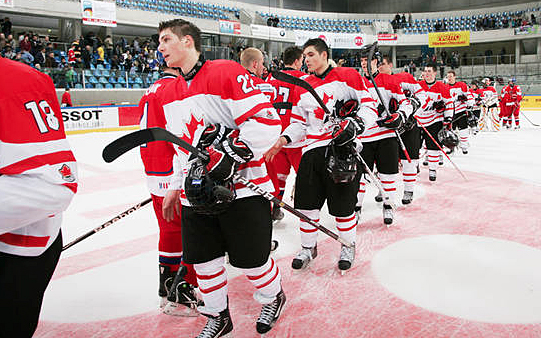 Nail Yakupov scored a hat trick as Russia denied Canada a medal with a 6-4 win in the bronze-medal game Sunday. The United States captured their third straight tournament championship, beating Sweden 4-3 in overtime in the gold-medal match.

Canada led 2-1 until Russia exploded with four goals in the second period. Canada pulled goaltender Andrew D’Agostini late in the third and the move paid off when Brett Ritchie scored to make it a one-goal game. But Yakupov sealed the win with an empty-net goal in the dying seconds.

Canadian head coach Mike Williamson said the team had a tough time regrouping from a heartbreaking 5-4 overtime loss to the United States on Saturday that knocked Canada out of gold-medal contention.

“It wasn’t for a lack of trying,” said Williamson. “I thought the guys gave a good effort. We had a good push and a surge at the end again. It just wasn’t quite enough gas in the tank I think.”

Ryan Murphy, Alan Quine and Ryan Murray had the other goals for Canada, while D’Agostini made 27 saves.

Nikita Kucherov scored twice and Vladimir Tkachev added one more for the Russians, who got a standout performance from goalie Andrei Vasilevski with 38 saves.

Williamson said Yakupov, who had 49 goals and 52 assists with the Ontario Hockey League’s Sarnia Sting last season, was the difference on the ice for Russia.

“(Yakupov) was very dynamic,” said Williamson. “We had a tough time solving him. We tried to take the time and space away. We tried to be physical on him. … He’s a good player, evasive and elusive, and because of that we weren’t able to contain him.”

A second straight power-play goal by Quine put Canada up 2-1 early in the second before Russia’s offence took over. Yakupov scored his first goal at the 7:40 mark and Tkachev put Russia ahead 44 seconds later.

With Alexander Kuvayev serving a two-minute penalty for tripping, Yakupov scored a short-handed goal and Kucherov added his second goal of the game five minutes later to give Russia a 5-2 lead.

Murray scored with the man advantage before the end of the second to make it a 5-3 game, but the damage was done.

“It’s obviously a tough loss,” said Ritchie . “We didn’t want to go home empty-handed and we fought right to the end. It’s a tough game. Couple bounces didn’t go our way and that’s what happens sometimes.”

The fourth-place finish is another disappointment for Canada, which placed seventh at last year’s event in Minsk and Bobruisk, Belarus. Canada last won the gold in 2008.

Ewanyk finished the tournament with one assist and and a plus-one rating with four penalty minutes in seven games at the tournament. He wasn’t the only Oil Kings player competing at the U-18 Championship, though, as defenceman Marek Hrbas captained the Czech Republic to an eighth-place finish. Hrbas scored four assists with two penalty minutes and an even rating in six games.

– The Canadian Press with files from the Edmonton Oil Kings