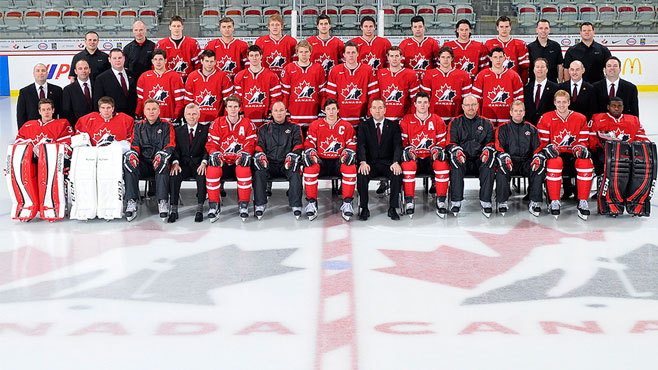 EDMONTON – Miro Aaltonen scored 7:16 into the third period Thursday night, snapping a 2-2 tie and sending Team Finland home with a 3-2 win over Team Canada in exhibition play at the 2013 World Junior Championship.

First-period penalties to Dougie Hamilton, Ty Rattie, Ryan Strome and Scott Harrington put Finland in the driver’s seat. At 15:12, 43 seconds into a 5-on-3, a cross-seam pass by Joel Armia connected with Calgary Flames prospect Markus Granlund down low. Wasting little time in rifling a one-timer, Granlund’s shot sailed up and over a desperate Malcolm Subban.

Finland led 14-4 in shots after one period of play.

Early in the second period, Canada surged back and scored a pair in 36 seconds to establish a 2-1 lead by the 3:41 mark. First, an unsuccessful 2-on-1 opportunity by Boone Jenner and Charles Hudon allowed Edmonton Oil Kings captain Griffin Reinhart to swoop in and pounce on the rebound.

The Finns responded at 10:02 — again on the power-play — as Olli Maata’s long-range point shot was redirected home by Ville Jarvelainen in the slot.

Finland continued to press, ultimately cashing the go-ahead goal at 7:16 of the third. In a seemingly rare even-strength sequence, Miro Aaltonen evaded pressure and walked into a prime shooting position. From the bottom of the faceoff circle, a pinpoint wrist shot beat Subban clean under the glove.

Penalties to Harrington, Nugent-Hopkins and Xavier Ouelett quelled Canada’s comeback bid; Finland emerged with a 3-2 win at the Vantaa Arena.

The Big Cat ended the night with a goal and +1 rating. Ice time stats have not been made available.

Reinhart, 18, was named captain on Sept. 18, 2012, becoming the Oil Kings’ fifth in modern franchise history. Following a breakout season in which he posted 12 goals, 36 points and was a defensive stalwart as his +23 rating would attest, Reinhart was selected fourth overall by the New York Islanders at the 2012 NHL Entry Draft.

In 31 games this season, the West Vancouver, BC product has collected four goals and 14 points. Reinhart also had the opportunity to participate in the 2012 Subway Super Series vs. Russia.

The 2013 WJC will be the 6’4”, 202-pound defenceman’s first chance to represent his country internationally.

Recent acquisition and Edmonton Oilers prospect David Musil will be playing in his second consecutive World Junior Championship. Last year, Musil was unable to collect any points (he did generate eight shots on goal, however), but he did establish a team-best +5 rating in as many games. The only other player close to that mark was Tomas Nosek at +3. Musil missed one game with a suspected concussion, but returned in time to help the Czech Republic earn a fifth-place finish by knocking off Slovakia 5-2 in the relegation round.

During last year’s tournament in Calgary, edmontonoilers.com caught up with David and his father, Frank, who’s also an Oilers scout.

Since being acquired by the Oil Kings in exchange for Mason Geertsen and a first-round bantam draft pick in 2013 back in October, Musil has picked up seven points in 17 games. Having notched 15 in 31 total appearances in 2012-13 between the Oil Kings and Vancouver Giants, the Delta, BC native is on pace to set a new career high in points.

After being selected 38th overall by the Oil Kings in the 2012 CHL Import Draft, Edgars Kulda is now playing in his first season with the club. In 33 games this year, the 17-year-old has collected four goals and 10 points (four points were tallied in December alone).

Kulda, originally from Belarus but will be suiting up with the Latvians, plays a similar style to ex-Oil King and Oilers prospect Kristians Pelss (also a Latvian).

The 5’11”, 181-pound winger has plenty of international experience. In the summer of 2012, Kulda posted three goals and four points in six games with Latvia’s U-18 entry at the Ivan Hlinka Memorial Tournament.