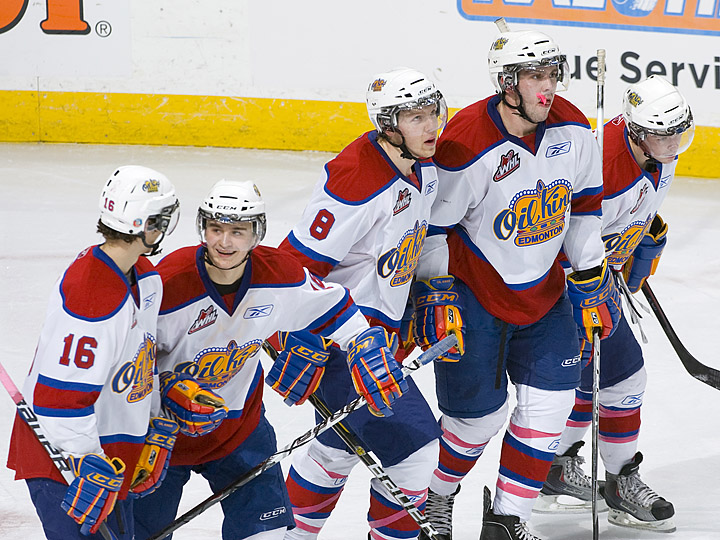 Edmonton, AB – After a huge road trip that saw the Oil Kings win four out of five wins Edmonton now sits at the top of the WHL table. With a record of 6-2-1-1 Edmonton is alone in first place for the first time in modern franchise history. The club is on a three game winning streak and is finding early season success thanks to several key players.

“Our guys really bought into what we had planned for our road trip, our philosophy was team first and the guys are all really buying in.” said Oil Kings Head Coach Derek Laxdal “Our goaltender Laurent Brossoit has found his groove and as a team our power play is scoring a goal a game and the penalty kill has been really good for us.”

In the cage, Laurent Brossoit started all five games for the Oil Kings and after a rough game in Saskatoon on Saturday in the second game of the trip rebounded with three straight games allowing only 1-goal each. Brossoit currently holds a record of 6-2-1-1 and sits in the Top 10 for goals against average, save percentage, wins and saves all while leading the WHL in minutes played. The native of Surrey, BC has also only allowed only one goal in each of his six wins and has posted 96 saves during this recent three game streak.

Defenseman Martin Gernat is proving to be an elite level WHL talent. An Edmonton Oilers 5th round draft pick, Gernat has had a tremendous start offensively for the Oil Kings. The 18-year old native of Slovakia has 5 goals and 9 assists for 14 points on the year, he has five multi point games and has tallied at least a point in all but one of his ten WHL games. The native of Kosice, Slovakia leads the team in scoring and leads all WHL defenseman as well as all WHL rookies in league scoring

Up front, T.J. Foster leads all Oil kings forwards with 10 points and three power play markers while Stephane Legault leads the team with five goals. Legault scored the Kings lone goal on Saturday night in Saskatoon and tallied his first career hat trick in Sunday’s 4-1 win over the Swift Current Broncos before adding another Wednesday night in Cranbrook. Overage Rhett Rachinski has quietly amassed eight points on the year as all three have added firepower to what was already a potent offence. 2010-11 statistical leaders Dylan Wruck and Michael St.Croix round out the top scorers with six points each

“Our entire team is playing really well right now and one of our real strength is our depth.” said Laxdal “A lot of our young guys are really stepping up and playing some big minutes for us in the absence of some players due to injury and suspension – guys like [Mason] Geertsen, [Mitch] Moroz and [Cole] Benson.”

While the rookies have continued to play solid minutes all eyes remain on top prospect Curtis Lazar. The 2nd overall pick in the 2009 WHL draft has now tallied his first WHL goal and had a two goal night, including the game winner, on Wednesday against Kootenay.

“We’re happy with the way Curtis is developing as a player and coming into his own.” said Laxdal “One of the goals he scored last night in Kootenay, he came off the half wall and just wired a shot – that was an NHL shot and an NHL calibre play.”

The first place Oil Kings will now return to home to for a matchup against the Regina Pats on Friday. Puck Drop is set for 7:00 PM as the Oil Kings look to extend their three game winning streak.