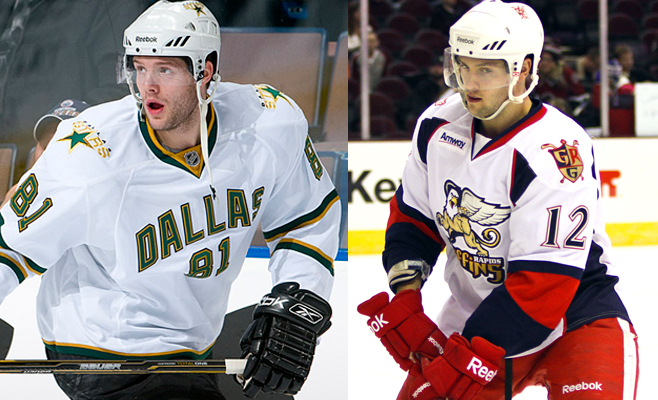 Edmonton, AB – Former Edmonton Oil Kings star forwards Brent Raedeke and Tomas Vincour were on the move on Monday, with both players and their respective NHL organizations headed in opposite directions.

Raedeke spent the entire 2010-11 regular season with the Grand Rapids Griffins of the American Hockey League, but after the Griffins failed to make the AHL post-season, the centre was called up to the Detroit Red Wings along with 14 other Griffins teammates to serve as “Black Aces” during the Red Wings’ 2011 Stanley Cup playoff run.

After starting the season with the Texas Stars and playing 21 games with the AHL squad, Vincour got called up to the Dallas Stars and played his final 24 regular season games with the NHL club, becoming the first former Oil King to compete in an NHL regular season game. But since Dallas failed to qualify for the post-season, the right-winger has been re-assigned to the Texas Stars for their quest towards the Calder Cup.

Raedeke, 20, played the entire 2007-08 and 2008-09 seasons with the Oil Kings, as well as 39 games in 2009-10 before getting traded to the Brandon Wheat Kings in the deal that brought Klarc Wilson to Edmonton. The Regina, Saskatchewan native scored 50 goals and 67 assists for 117 points in 181 games with Edmonton, holding the modern franchise lead for career points until Michael St. Croix surpassed him in 2010-11.

The 6-foot-0 Raedeke was signed by the Red Wings in October 2008 and played two games with the Griffins at the end of the 2008-09 season, but didn’t record any points. After his trade to Brandon, he was a key player for the Wheat Kings’ 2010 Memorial Cup host squad. Raedeke appeared in 67 games during his rookie campaign with the Griffins this season, scoring eight goals and five assists to go along with a minus-3 rating.

The 6-foot-2 power forward was recalled by Dallas on Feb. 6, 2011 and appeared in 24 games for the Stars, collecting one goal and one assist, including making his return to Rexall Place to play the Oilers on Feb. 15. Prior to being recalled by Dallas, Vincour earned two goals and four assists with the Texas Stars. The Brno, Czech Republic native was the Stars’ fifth-round selection (129th overall) in the 2009 NHL Entry Draft.

Vincour and the Texas Stars are set to battle the Milwaukee Admirals in the first round of the Calder Cup playoffs, while Raedeke and the Detroit Red Wings are up against the Phoenix Coyotes in the NHL’s Western Conference quarterfinal round.