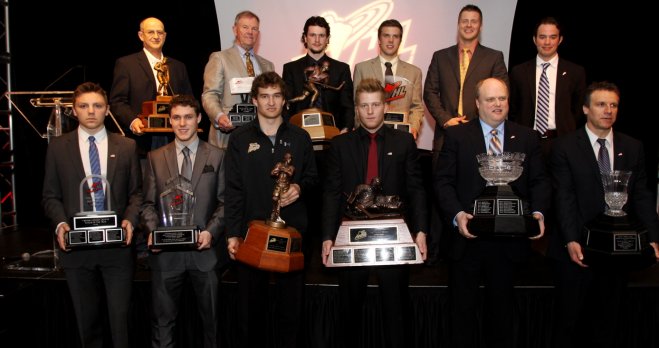 Calgary, AB – The Edmonton Oil Kings are very proud to congratulate General Manager Bob Green on being awarded the Lloyd Saunders Memorial Trophy as 2012 WHL Executive of the Year. Green has been the General Manager of the Oil Kings since their re-entry into the WHL in 2007.

Under Green’s guidance, the Oil Kings have seen several modern franchise bests in the 2011-12 regular season as well as the 2012 WHL Playoffs. That includes the team’s first berth in the WHL Championship Series presented by Cal Tire and Husky which begins this Thursday in Edmonton.

“I am honoured to be awarded the Lloyd Saunders Memorial Trophy but this is an award that I share with our organization as a whole.” said Green. “Everyone from administration through our hockey operations has a role in this award. It has been a great season for us so far and we hope for continued success in our push for a WHL Championship and a Memorial Cup.”

The Oil Kings were also awarded the WHL Scholastic Team Of The Year award for their achievements off the ice at Wednesday’s Annual WHL Awards Luncheon.

“Every one of our players have seen success on and off the ice this season and this is a reflection of that.” said Green “We owe a lot to our Education Advisor  Roger Castle and the staff at Salisbury Composite High School who go above and beyond with their commitment to our player’s education.”

Games 1 and 2 of the WHL Championship presented by Kal Tire and Husky in Edmonton will be played on Thursday, May 3rd and Friday, May 4th at Rexall Place.  Both games start at 7:00 p.m. Tickets for the WHL Championship Series are on sale now at oilkings.ca, by calling (780) 414-GOAL (4625), at the Oil Kings Ticket Office at TELUS Field (10233-96 Avenue) or at the door. The 2012 Oil Kings Playoffs are presented by ATB Financial.