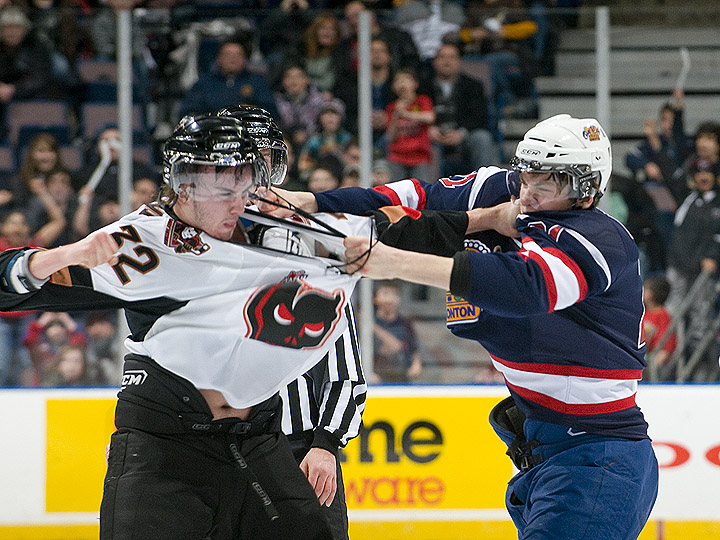 Edmonton, AB – The forward line of Mark Reners, Klarc Wilson and Stephane Legault put four goals on the board Monday night at Rexall Place as the Edmonton Oil Kings beat up on the provincial rival Calgary Hitmen 7-1.

It was a World Cup atmosphere at Rexall for Kick Calgary Night, with a solid Monday night attendance of 7,169, many of whom were making plenty of noise with the 500 vuvuzela horns distributed throughout the crowd. The fans were literally buzzing and so were the Oil Kings, as they jumped out to a 2-0 lead after the first period, added four more in the second and one in the third for the easy win.

Wilson and Legault tallied the first two goals of the blowout, both unassisted and as a result of Hitmen turnovers, while Reners scored a pair in the middle frame, the second on a nifty breakaway backhand five-hole effort. Jordan Hickmott scored on a power-play deflection, and Mike Piluso converted on a rebound to close out the middle frame. Wruck drove down the right wing for another unassisted tally to make it 7-0 in the third, while Chase Clayton broke Edmonton goalie Laurent Brossoit’s shutout with 10:40 remaining.

The Oil Kings outshot the Hitmen by a dramatic 15-1 margin during the first period and finished the night ahead 36-21, as Brossoit turned aside 20 shots to pick up his second straight win. In addition to Reners and Wilson, Keegan Lowe also had a two-point night with a pair of assists. Travis Ewanyk earned a decisive fight victory over Calgary’s Brendan Santini, while heavyweights Cam Abney and the Hitmen’s Alex Roach also went toe-to-toe.

Monday’s battle of Alberta was the sixth and final meeting between the rivals this season, as the Oil Kings were victorious in five of six. The game was televised live on Rogers Sportsnet West and Pacific, and was the only action in the WHL on Monday. Edmonton improved to 29-28-2-5 on the year to give them 65 points, putting them three points up on the Brandon Wheat Kings for sixth place in the Eastern Conference, with eight games left on both teams’ schedules.

Next up for the Oil Kings this week is a highly-anticipated showdown with Brayden Schenn, Edmonton Oilers draft pick Curtis Hamilton and the first-overall Saskatoon Blades for the final K-97 and 96.3 Capital FM Wiener Wednesday of the regular season at 7 p.m. at Rexall Place. The Medicine Hat Tigers are also in town on Friday for Minor Hockey Wrap-Up Party Night.