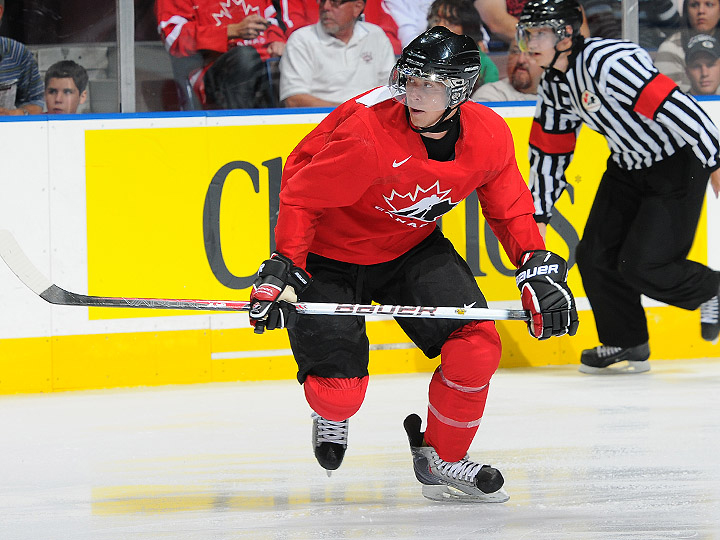 Oil Kings defenceman Mark Pysyk will share his experiences and thoughts here throughout the week while he competes at the Hockey Canada National Junior Team Summer Development Camp in Edmonton and Fort McMurray.

You can cheer for Mark as he skates with Team Red during the camp, as all practices at Rexall Place are free to attend, and tickets to Saturday’s Red-White intrasquad game are now available for purchase.

Well, the end of the week is here and it was a very long week looking back. Today’s game day was a lot different than any I’ve had before. We woke up, had breakfast at the Westin Edmonton where we stayed all week and got right on the bus to the airport.

We flew to Fort Mac, then had a luncheon with sponsors, which was very well organized, and the city seemed very excited to have the second Red-White game. After that we checked into a hotel in Fort Mac for a pre-game nap, but golf was on and I was watching Rickie Fowler so I didn’t get a nap in.

We were then off to the game, and we were lucky enough to use the Oil Barons dressing room, and it looks really new and is a very nice room. The game went well. My team, Team Red, won 8-2 and we played a full 60 minutes this time — didn’t give up a late lead like we did in Edmonton. In the shootout, however, we were unable to score.

That brings us to the end of this camp. Hopefully I’ll be back in December at the main selection camp to make a push to make the team, and then eventually help Team Canada win a gold medal at home.

Today was a pretty long day looking back on it. We had a pre-game skate this morning, but in a camp like this there’s no time to just get on the ice for a couple of drills. It was a full-out practice, which took a little bit out of the boys, but the Red-White game showed no signs of anyone being tired.

Right before the game I went with Dillon Simpson, Tyler Bunz and RNH up to the coolest place in Rexall — which I didn’t even know existed — and chatted and hung out with the Oil Kings Founders Club members for a while. It was great to spend time with the most dedicated Oil Kings fans. They had chicken fingers up there, which was tough to avoid right before the game, especially talking to people holding platefuls of them. After that we headed back downstairs and got ready for the game.

The game was very high-paced and pretty physical as well. It was very exciting to play in front of all those fans and it must have motivated everyone, because as the game went on the pace didn’t slow. My team, Team Red, had the lead when late in the game a few quick goals from Team White put them ahead, and with RNH scoring with 20 seconds left we couldn’t come back.

One more game left in camp on Sunday up in Fort McMurray, which should be another great crowd. It’s been a long week but everyone will want to leave a good impression on the way out of camp.

Hey everybody! Here’s everything that’s happened over the last two days. On Thursday we had a pair of practices — one in the morning where we worked on our d-zone and that was the toughest practice so far because we did a lot of battle drills simulating real game action, as well as a lot of teaching.

The second ice time of the day was a game — or three games where each period counted as a game — and we played a best-of three-series to see who had the early skate on Friday. Team Red won all three so we got a nice sleep in. The game was very high paced and it was very neat to see all these highly skilled players in a game situation playing together.

Friday was a special teams practice in the morning and we did a lot of teaching then as well, and a lot of practice on the power play and penalty kill.

After practice we headed over to the army base, which we thought was going to be a relaxing afternoon, but we ended up rappelling down a pretty tall tower, which for a lot of guys was very scary. At the end when I made it down, no word of a lie my knees were shaking so bad I could barely stand up.

After that we went over to an obstacle course, which looked pretty tough and turned out to be even tougher. We ran these laps climbing over ladders, balancing on wooden beams, going over and under stuff and crawling underneath the wire, which proved to be the hardest one judging by everyone’s cuts and bruises.

After those two events we had a great barbecue with some of the soldiers, then had a mini autograph session for the families of the soldiers on the base.

It’s been a long two days since I last checked in and I’m looking forward to the Red-White game come Saturday! I hope to see you all in the stands at Rexall!

Yesterday was a fairly busy day with all the interviews and running around the hotel, but today we were on the ice twice — once for the skills videos which they show on TV during the tournament, and then our Team Red practice in the afternoon.

The skills were pretty quick. We were on the ice for about 15 minutes and then had two more interviews — one with Gatorade, and it was kind of weird because it was filmed in the Oil Kings dressing room. I had a good chat with our Oil Kings trainer Brian Cheeseman, and it just felt like another day at the rink during the season. The other interview was for TSN where I had to explain the drill I did on the ice.

The practice in the afternoon was pretty quick. Everyone out there is always trying to impress so the pace was up the whole time. We worked a lot on the forecheck, both offensive zone and neutral zone. Other than that we did some shooting drills and a two-on-two game at the end. I’m excited to see what the games are like after a good hard practice day today.

It’s a really exciting day for me today! I have to check in at the Hockey Canada World Junior Development Camp, and luckily this year the travel day will consist of a 15-minute road trip with my good buddy from Sherwood Park and fellow defenceman Joe Morrow, instead of a five-hour flight to Toronto and then another flight to St. John’s, Newfoundland, like I had to do for last year’s camp.

My summer has gone really well so far. I’ve been training hard and had a really productive week in Niagara, New York, for the Sabres Development Camp last month. I’m feeling more and more comfortable as a part of the Buffalo organization and I’m really looking forward to my future with that team.

I have been looking forward to this World Junior summer camp in Edmonton since last Christmas when I didn’t make the cut for Team Canada. I’m looking to make a good impression this season, which hopefully leads me to a different fate and a chance to represent my country in my home rink.

Going into camp, I would like to make a good impression on the coaching staff by playing my game, making every pass crisp and hard, and jumping up into the play. I expect the tempo of the camp to be very fast and pretty physical, as everyone is trying to do the same as me.

It should make for two very exciting games on the weekend, but before that, practices will be very high-paced and competitive as well. Anyways, I’m a little bit nervous as well, but I think once I get into the hotel and get to the rink that I play at all season I will calm down a bit and just enjoy the experience.

I look forward to keeping everyone up to date throughout the camp! And hopefully I’ll see some familiar faces in the stands at the arena!