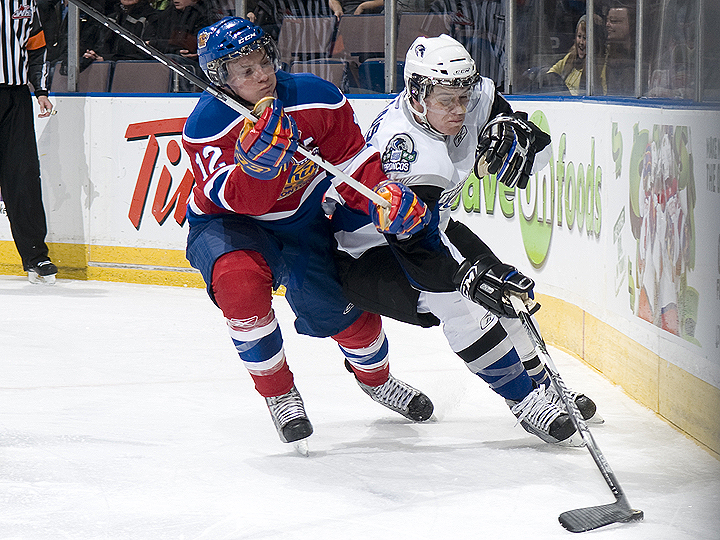 Swift Current, SK – Adrian Van de Mosselaer blasted a slap shot for the game-winner with 8:07 left in the third period to give the Edmonton Oil Kings a much-needed 3-2 win over the Swift Current Broncos on Sunday at the Credit Union iPlex.

The Oil Kings closed out their weekend road trip in Swift Current, looking for a victory after a 5-4 shootout loss in Moose Jaw on Friday and a 6-4 defeat in Brandon on Saturday. The visitors jumped out to a 2-0 lead after 20 minutes, but the Broncos battled back to tie it up 5:35 into the third period before Van de Mosselaer’s game-winner.

David Stephens scored his first career WHL goal to give Edmonton a 1-0 lead 8:19 into the first period, converting on a rebound, and Rhett Rachinski also banged home a rebound for his fifth of the season three minutes later to make it 2-0. Colton Stephenson assisted on both of the Oil Kings’ first period goals and was picked as the game’s first star.

Justin Dowling put the Broncos on the board 7:42 into the middle frame and then set up Jordan Peddle’s equalizer five minutes into the third. But the Oil Kings prevailed as Dylan Wruck, T.J. Foster and Michael St. Croix executed the cycle to perfection and got the puck back to the defenceman Van de Mosselaer, who blasted home the eventual winner for his fourth of the year.

Goalie Jon Groenheyde got the victory for the Oil Kings with a 25-save performance, including a pair of outstanding stops on Swift Current’s Christian Magnus during the opening frame. Edmonton outshot their opponents 35-27, as Broncos goalie Mark Friesen took the loss with 32 saves.

Sunday’s slim victory was an important one for the Oil Kings, who improved to 26-27-1-4 on the season and re-established their five-point cushion in sixth place in the Eastern Conference. They now have 57 points, while the Brandon Wheat Kings are in seventh with 52 points. Both teams have now played 58 games.

With their three-games-in-three-nights road trip now complete, the Oil Kings return home on Friday night to play the Kamloops Blazers at 7 p.m. at Rexall Place for Singles Night, as a section of the crowd will be reserved for eligible bachelors and bachelorettes to meet, mingle and cheer on the home team.