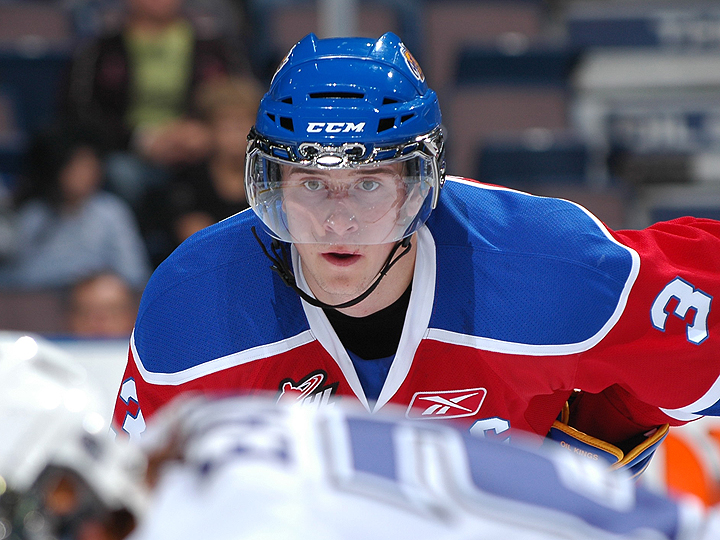 Edmonton, AB – For the first time in the team’s modern history, an Edmonton Oil Kings player has been named the Western Hockey League’s Player of the Week. And it’s only fitting that player was the modern franchise’s first-ever bantam draft pick.

The WHL announced Monday Oil Kings defenceman and team captain Mark Pysyk — selected third overall by Edmonton in the 2007 Bantam Draft — is this week’s Player of the Week. Pysyk picked up six points, scoring one goal and five assists to go with a plus-3 rating, in two games over the past week, helping the Oil Kings earn three out of a possible four points.

The Oil Kings dropped a 5-4 shootout decision to the Prince Albert Raiders at Rexall Place last Wednesday, and the Sherwood Park native collected two assists and was named the game’s first star. And this past Friday, the Brandon Wheat Kings were in Edmonton to face the Oil Kings, and Pysyk scored once, added three assists and was named the game’s second star as the home side doubled up the Wheat Kings 8-4.

The 18-year-old has racked up nine points in his last four games, bringing his season point total to 14 (one goal, 13 assists) in 23 games played. The Oil Kings have gone undefeated through regulation in their last five games (4-0-0-1) and currently sit in eighth place in the WHL’s Eastern Conference with a 12-14-0-2 record.

Pysyk has had a hugely successful last six months, starting with his first-round selection (23rd overall) to the Buffalo Sabres at the 2010 NHL Entry Draft. He also attended Hockey Canada’s National Junior Team Development Camp, and leaves for Toronto on Saturday for the World Junior Selection Camp. He also recently played for Team WHL against Russia at the Subway Super Series for the second year in a row.

Pysyk and the Oil Kings head to Calgary to play the Hitmen on Wednesday at 7 p.m. at the Scotiabank Saddledome, which will be the blue-liner’s last game before World Junior tryouts. The Oil Kings’ next home game is Saturday, Dec. 11 against the Kelowna Rockets at 7 p.m., as it’s Kids Eat Free Night at Rexall Place.