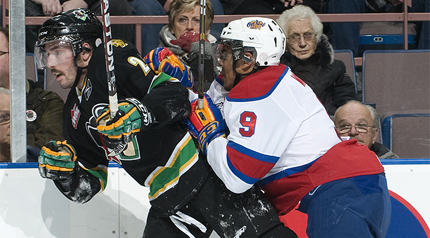 Prince Albert, SK – The Edmonton Oil Kings played the second game of their two-game road trip to start the season and took their first victory of the 2011-12 campaign with a 4-1 win over the Raiders in Prince Albert on Wednesday night.

Edmonton came out flying in the first period and outshot the hometown Raiders 18-4. Newcomer Martin Gernat broke the ice just past the midway point of the period as he notched his second WHL goal in his second WHL game. Minutes later the Oil Kings modern franchise record holder for goals in a season (38 in 2010-11) was back at it again as Dylan Wruck tallied his first of the 2011-12 campaign. Finally, with just over a minute remaining in the period, Rhett Rachinski scored his first of the season to give the Oil Kings a 3-0 lead going into the second period of play.

93-born goaltender and Calgary Flames draft pick Laurent Brossoit stood tall during the push back from Prince Albert in the second as the Oil Kings successfully killed off two Raiders’ powerplays in the period. Brossoit was coming off an impressive 29 save performance in Red Deer and carried 20 saves into the third and final frame. The other half of the Oil Kings “Dynamic Duo” of modern franchise record holders, Michael St.Croix,  scored his first of the season to round out the Edmonton scoring.  Justin Maylan replied for the Raiders.

St Croix and Gernat would both finish the night with a goal and an assist while Ashton Sautner added a pair of assists to extend the defenceman’s point streak to two games as well. Gernat and Sautner currently sit 1 and 2 among defencemen in the WHL rookie scoring race. The Oil Kings power play was 0 for 3 on the night but the penalty kill came up strong holding the Raiders to 1 for 6 with the man advantage. Edmonton outshot the home team 40-31 and controlled the pace of the game most of the night en route to their first win of the season.

The Oil Kings will now return to the City of Champions after a pair of road games for their Home Opener Friday September 30th against the Medicine Hat Tigers. Last season Edmonton posted a 20-12-1-3 record in the friendly confines of Rexall Place and will hope to shine in the 5th Home Opener in the Modern Franchise History.    Fans are encouraged to arrive at Rexall Place early with a Lower Bowl sellout and high volume of traffic expected.  As a reminder, the Rexall Place parking lot north of the building is reserved for season seat holders with passes only.   Value parking is available to customers for just $5.  For more information on parking, click HERE. Also, the first 500 fans to the game will receive a FREE jersey t-shirt featuring Edmonton Oilers draft pick Travis Ewanyk.

The Oil Kings are proud to announce their new season and new pricing make Oil Kings hockey more affordable than ever. Individual game tickets have been reduced by up to 30% with tickets starting at Just $15 and now some of the best side seats in the house are just $20.  To purchase tickets, click the link at the top right corner of this page or they can be purchased at any Ticketmaster location, at the Oil Kings ticket office (10233-96 Ave) during regular business hours, online at oilkings.ca or by calling (780) 414-GOAL (4625).