Oil Kings & Rebels Ready To Rumble In First Round 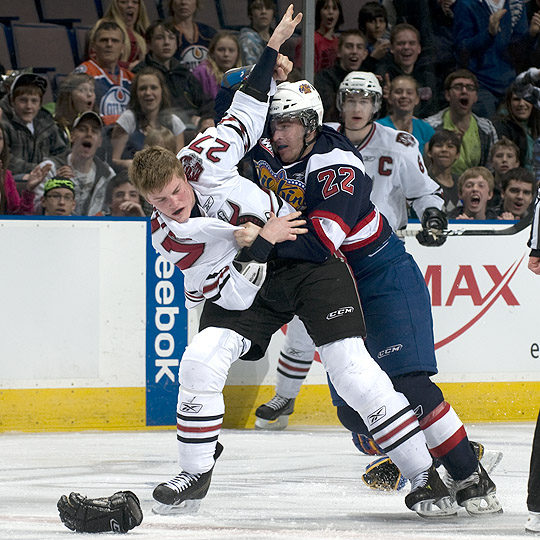 Red Deer, AB – Saturday night’s regular season finale between the Edmonton Oil Kings and Red Deer Rebels at the ENMAX Centrium served merely as a warm-up for the bitter rivals, as they will now wage war in the first round of the WHL playoffs.

The provincial enemies closed out the regular season with a home-and-home, as the Rebels squeaked out a 4-3 win on Friday at Rexall Place and then edged the Oil Kings again 3-1 on Saturday in Red Deer. Potential 2011 NHL first-overall draft pick Ryan Nugent-Hopkins scored two of the Rebels’ goals to lead his team to victory in Saturday’s season wrap-up.

Heading into Saturday’s action, the Oil Kings still had a chance to finish in sixth place in the Eastern Conference, but the Brandon Wheat Kings beat the Moose Jaw Warriors 8-4 to clinch the higher seed. The Oil Kings (31-34-2-5, 69 points) end the season in seventh place and will now battle the second-place Rebels (48-16-4-4, 104 points) in the first round.

Nugent-Hopkins tallied his 30th goal of the season to make it 1-0 Rebels 3:43 into Saturday’s game, as he blasted a wrist shot top-shelf on on Oil Kings goalie Jon Groenheyde. Cam Abney tied it up for Edmonton at 12:04, banging in a rebound off the end wall on a shot by Braeden Laroque. Abney also earned a fight victory over fellow heavyweight Alex Petrovic late in the first.

Nugent-Hopkins struck again for the eventual game-winner 8:34 into the middle frame, beating Groenheyde with a deke. The Oil Kings goalie was otherwise flawless, though, stopping 30 shots in a losing cause. Brett Ferguson scored an empty-netter to seal the Red Deer win, while Rebels netminder Darcy Kuemper picked up the victory with a 23-save performance.

The first round of the WHL playoffs, presented by Kal Tire and Husky, starts with Game 1 and Game 2 between the Rebels and Oil Kings on Friday, March 25 and Saturday, March 26 at 7:30 p.m. in Red Deer. The series then moves to Edmonton for Game 3 and Game 4 on Monday, March 28 and Thursday, March 31, both at 7 p.m. at Rexall Place.

Tickets to every Oil Kings home game, including the first two home games of the 2011 playoffs against the Rebels, are available starting at just $15 at any Ticketmaster outlet, online at oilkings.ca, or by calling 780-414-GOAL (4625).