MENU
THE WESTERN HOCKEY LEAGUE HAS ANNOUNCED ITS RETURN TO PLAY PROTOCOL FOR THE 2020-21 SEASON
December 27, 2010 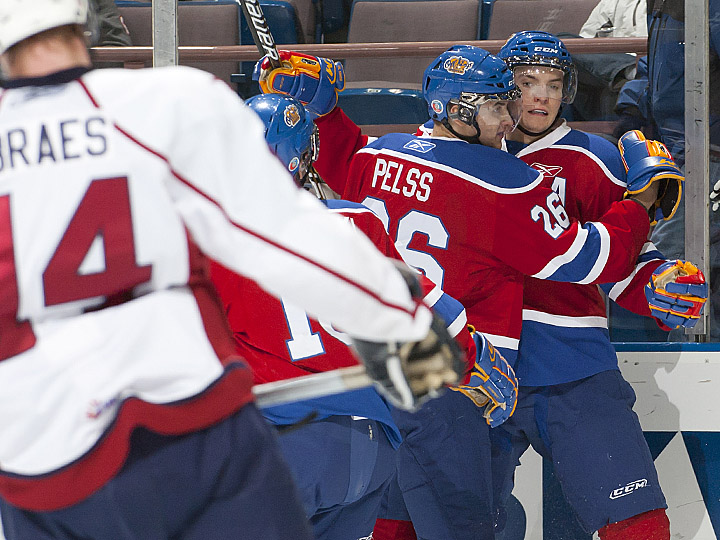 Edmonton, AB – The Edmonton Oil Kings’ usual suspects did the damage on Monday night at Rexall Place, as their three leading scorers accounted for their three goals in a slim 3-2 victory over the Lethbridge Hurricanes.

Michael St. Croix tallied his team-leading 19th goal of the year, while Jordan Hickmott scored his 18th and Dylan Wruck tallied his 15th, to lead the Oil Kings past the Central Division rival Hurricanes in the first night of Western Hockey League action following the holiday break.

St. Croix opened the scoring by deflecting a Keegan Lowe point shot past Hurricanes goalie Brandon Anderson 4:28 into the first period. Wruck made it 2-1 Edmonton later in the frame on the power play, chipping home a rebound after a St. Croix shot. And Hickmott one-timed a feed from Kristians Pelss, who burst past his defender down the right wing and zipped a perfect pass across to his teammate to make it 3-1 after two.

Cam Braes made it 3-2 early in the third with his second point of the night for Lethbridge, but Edmonton goalie Jon Groenheyde shut the door from there, finishing with 16 saves for the win. The Oil Kings outshot the Hurricanes 36-18, as Pelss, St. Croix and Hickmott each scored two points.

“The first game after Christmas is always a tough one, and Lethbridge came in here and played pretty solid, but our boys found a way to get the two points,” Oil Kings Head Coach Derek Laxdal said. “I didn’t think we played as well as we were playing before the break, but it’s big when you can find ways to win games like that.”

The win put the Oil Kings back above .500 for the season, as they upped their record to 17-16-0-2, ending a two-game losing streak that took them into the holiday break. They solidified their seventh-place standing in the Eastern Conference, and their 36 points puts them just two points back of the Swift Current Broncos for sixth, with four games in hand. Edmonton has two games in hand and is four points up on the eighth-place Prince Albert Raiders.

The Oil Kings and Hurricanes meet again in Lethbridge on Wednesday night for the second half of their home-and-home series. Edmonton will then host the Brandon Wheat Kings on Friday for a special 6 o’clock New Year’s Eve game that will feature indoor fireworks at Rexall Place to ring in 2011.