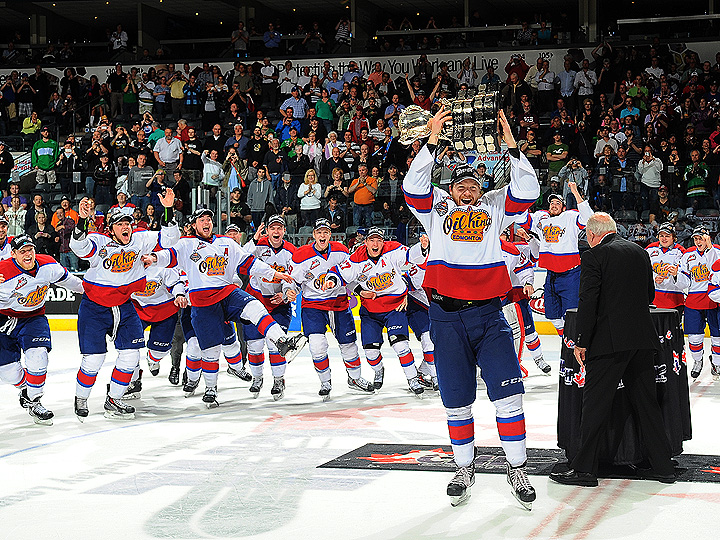 LONDON, ONT. – The Edmonton Oil Kings capped off an unbelievable and memorable season with a dramatic 6-3 win over the Guelph Storm in the Memorial Cup Final.

It was a team that would never give up and would never fold despite having the odds stacked against them time and time again. From an astounding bounce-back win in Game 7 against the Portland Winterhawks of the WHL Final to Friday’s inspiring triple-overtime win over Val d’Or, the Oil Kings simply would not be denied in 2014.

“I could cry right now,” said Oil Kings head coach Derek Laxdal. “The emotional feelings for our players, to represent the Western Hockey League and bring that trophy back, where all you heard all week was ‘you haven’t won it for five years and Guelph’s this and this.’

“Our kids don’t care who we’re playing. They’re going to play a certain way, they’re going to grind out a win and what do you say about some of the efforts tonight? I thought everybody stepped up. They were focused and ready to put a Grade A effort forward.”

The win was the first Memorial Cup in modern franchise history and third overall, with the team having won in 1963 and 1966 previously.

It only took Guelph a minute to get the game’s first goal. Robby Fabbri intercepted a pass and the Storm came in on a three-on-one. After a nice three-way passing play, Fabbri converted, putting the puck into the open cage.

Jason Dickinson took a penalty for holding the stick near the eight-minute mark, giving Edmonton its first power play of the afternoon and that’s where the tide started to turn a bit in the first period.

Less than a minute into the man advantage, Curtis Lazar was hauled down in the neutral zone by Tyler Bertuzzi to put Edmonton on a five-on-three and it was there that they tied the game.

“I thought we did a better job of reading their rims off the walls and not activating our defence,” said Laxdal. “I thought we did a great job on special teams, with two power play goals. And the belief that we could beat them. You know, they’re a very good hockey club. Great transition. But we knew we had to grind out their defencemen and hunt them.”

The Oil Kings moved the puck around well with the extra two men on the ice, eventually setting up a Cody Corbett blast from the top of the left circle on a nice back-and-forth passing play with Henrik Samulesson. Corbett wired the puck past Guelph goaltender Justin Nichols.

Guelph started to take the game back late in the first. Jarry had to make an outstanding glove save off a wrist shot from the left circle by Zack Mitchell and then 30 seconds later, Stephen Pierog pounced on a rebound to put the puck into the open net past an outstretched Jarry to put the Storm back in the lead.

Shots on goal after one period ended up at 20-14 for Edmonton.

Oil Kings got back on even terms 1:58 into the second period. Tyler Robertson’s shot beat Nichols as the fourth line came through with a big goal.

Four minutes later, the Oil Kings nearly took the lead as Kieser and Lazar both had great looks at the net. Moments later, Scott Kosmachuk took an interference penalty to put Edmonton back on the power play.

Only 16 seconds into the PP, Edmonton scored to take their first lead of the game. Edgars Kulda’s shot went off the shoulder of Nichols and into the top of the net.

Kulda was named tournament MVP, with four goals and three assists with a plus-three rating.

“It’s playoff hockey. It’s one game. There’s no such thing as being tired. We need to go and play no matter what,” Kulda remarked on the ice during the celebration. “It’s a real dream right now. Fantasies come true, hey?”

The Oil Kings then extended their lead to two goals at 4-2 with 5:41 to play in the middle frame. Mitch Moroz wired a shot high glove side from the left circle for his second goal of the tournament.

An emotional Moroz summarized the moment after the game.

“I don’t have a lot of words right now. I’m trying to soak it up as best I can but these moments are so surreal. It’s hard to find the words sometimes. I’m just really proud of these guys,” said Moroz, who was then asked to describe that goal. “We had an odd-man rush. Eddie hit me and I don’t think the goalie was set. It felt like I was due for a two so it was lucky that it went in at the right time.”

Moroz also talked about the emotion he felt with the team having so much success in a season that they dedicated to former teammate Kristians Pelss, who passed away last summer.

“It’s fitting. It’s an unbelievable blessing. We had that guardian angel looking down on us the whole year. We knew we couldn’t lose with him up there. I wish he was here.”

Shots in the second period were 15-8 for the Oil Kings and 35-22 overall in the game in favour of Edmonton.

Guelph came out flying to start the third period and it paid off with a goal early in the final frame. Mitchell quickly tapped in a pass from behind the net by Kerby Rychel to make it 4-3.

But Edmonton responded well after the goal. Less than two minutes later, Henrik Samuelsson ripped a shot glove side past Nichols after a nice centring pass by Kulda to put Edmonton back in front by two. Moroz got the other assist on the play to extend the lead to 5-3.

Samuelsson added an empty-netter with 1:26 to play to clinch the victory.