MENU
The 2019-20 Western Hockey League regular season, 2020 WHL Playoffs and 2020 Memorial Cup presented by Kia have been cancelled due to the COVID-19 pandemic. 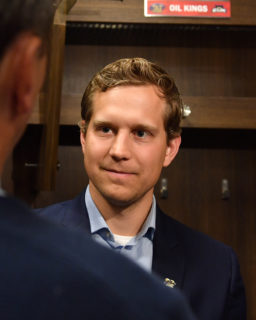 Kirt Hill is in his first season as President of Hockey Operations and General Manager for the Edmonton Oil Kings. He joins the team after serving as an amateur scout for the Chicago Blackhawks (NHL) during the 2017-18 season.

The Winnipeg, MB native brings with him a wealth of Western Hockey League experience, having worked for the League from 2014-17 in the role of Manager of Player Development and Recruitment, as well as Director of Hockey Operations. Prior to his time at the WHL, he worked as a member of the Ottawa Senators marketing department during the 2013-14 season.

Hill was drafted in the 2nd round, 40th overall by the Kelowna Rockets in the 2003 WHL Bantam Draft. He spent two-and-a-half seasons with the Rockets which culminated in a WHL Championship in 2005 before suiting up for the Regina Pats from 2006-08. Prior to his time in the WHL, he won gold with Team Canada West at the World Under-17 Hockey Challenge in 2004.