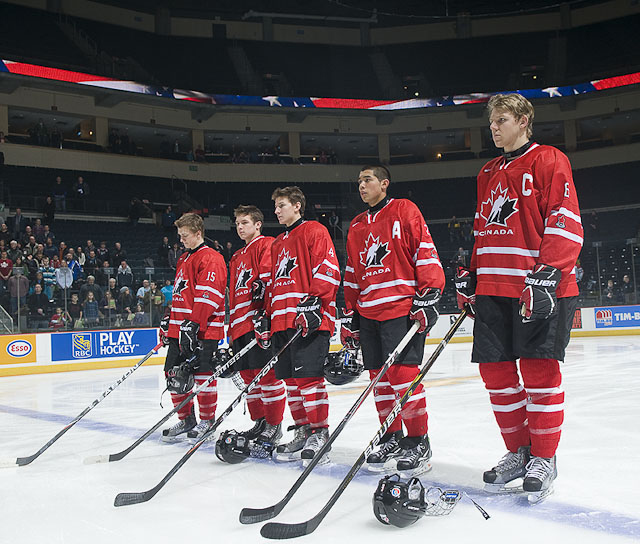 Winnipeg, AB – Edmonton Oil Kings defenceman Griffin Reinhart and Team Pacific had quite a roller-coaster final two days at the World Under-17 Challenge in Winnipeg and ultimately finished with medals around their necks.

After posting a stellar 3-1 round-robin record, Team Pacific found themselves in Monday’s semifinal round against the undefeated defending champions from the United States. They waged an epic battle against the Americans, but eventually had their hearts broken with a 6-5 overtime loss.

Pacific bounced back in a big way, though, and ended up finishing the tournament on a high note on Tuesday, getting on the positive side of overtime with a 5-4 sudden-death win over Team Quebec to capture the bronze medal. Ontario knocked off Team USA 5-3 also on Tuesday to capture the gold.

Chilliwack Bruins forward Brandon Magee was the OT hero, scoring 1:34 into the extra period to cap off the wild bronze match that saw Pacific battle back from a 3-1 deficit. The comeback was nothing new for Pacific, which fought back from a 5-1 second-period deficit to force OT on Monday versus Team USA.

Reinhart, a rookie blue-liner with the Oil Kings this season, was outstanding on the back end for Team Pacific, scoring one goal and chipping in with six assists during six games at the tournament, in addition to serving as the team captain. His production shouldn’t come as a surprise, though, as the 6-foot-4, 205-pounder leads the Oil Kings in scoring among defencemen with 17 points in 33 games.

The team’s first-round (third-overall) selection in the 2009 WHL Bantam Draft will make his return to the Oil Kings’ lineup on Saturday when they host the Regina Pats at 7 p.m. at Rexall Place. It’s Pink At The Rink Night in support of the Alberta Cancer Foundation, as well as Ukrainian Night presented by Cheemo Perogies.