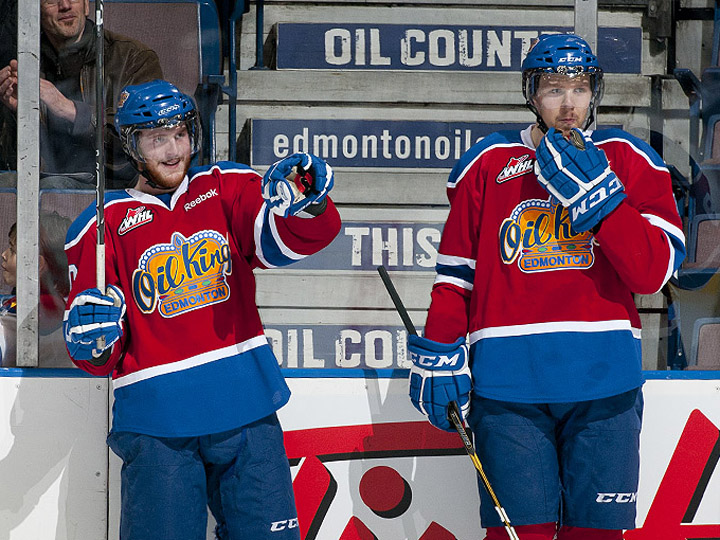 Edmonton, AB – Michael St.Croix had another amazing four point night with two goals including the game winner as the Oil Kings rumbled to their sixth win in a row with an 8-3 win over the Saskatoon Blades on Sunday night at Rexall Place. The six game win streak marks the first ever in the modern era of the franchise.

Tyler Maxwell got things started in the first on the power play when after a scramble in front St.Croix fed him in the slot to set up Maxwell’s 16th goal of the season. Maxwell would add a pair of assists over the course of the night to give him a total of nine points and five goals in his first five games with the Oil Kings. The Blades would show some push back in the first as Lukas Sutter tallied in the final minute of the period to knot things up at 1. Saskatoon poured in 12 shots in the first but goaltender Laurent Brossoit came up big to keep the Oil Kings in it.

In the second the Oil Kings broke things open starting with rookie Curtis Lazar’s ninth of the year as he scooped a rebound into an open net two minutes into the period. Later, the Oil Kings would notch their first of many power play goals on the night as St Croix found a rebound in traffic and tallied his 15th of the season to make it 3-1. Minutes later the Blades would fine the net once again to pull within one but the Oil Kings once again showed they have one of the most explosive offenses in the WHL. St.Croix notched his second of the night just 26 seconds after the Blades goal to make it a 4-2 game.

A head hit from Saskatoon’s Jake Trask on Griffin Reinhart led to a five minute major and a game misconduct for the Blades that the Oil Kings took full advantage of. Rhett Rachinski was on the receiving end of a pretty feed from St.Croix for his 8th of the year. A minute and a half later Captain Mark Pysyk blasted a pinball like shot that went off two defenders and into the Saskatoon net to make it a 6-2 game. Finally, while still on the power play Mitch Moroz spun in the slot and ripped home his fourth of the season to make it 7-2 going into the third. In total, Edmonton totalled five power play goals on the evening on what was technically six power play opportunities.

The special teams scoring continued in the third as T.J. Foster would make it an 8-3 game, winning a battle on an offensive zone faceoff and wiring home a shot for his 11th of the season while Edmonton was shorthanded. The Blades would add one more of their own to make it an 8-3 game but that would be the final as the Oil Kings cruised to their sixth straight win, this one over one of the Eastern Conference’s top clubs.

St.Croix remains one of the hottest players in the WHL today, totalling nine goals and ten assists in his last seven games. In total 13 Oil Kings had at least a point on the stats sheet Brossoit had another solid game in the cage making 25 saves on the night for his 16th win of the season. With this win Edmonton’s overall record moves to 18-8-1-2, good enough for second in the WHL Central Division.

The Oil Kings will now move on to the sixth game in their run of 11 straight at home this Tuesday as they take on the Calgary Hitmen. Puck Drop is set for 7PM MST at Rexall Place – all games this season will be broadcast live on the TEAM 1260 and streamed live at WHL.ca Oil Kings hockey is Edmonton’s best family entertainment value. The 2011-12 season of Oil Kings hockey is presented by Jardine Lloyd Thompson (JLT) Canada and features new reduced pricing with great seats starting at just $15 and premium seating locations starting at just $20. Oil Kings tickets are available online at OilKings.ca, via phone at 780-414-GOAL or at any Ticketmaster outlet.

Follow these links:
FOR THE WHL SCORING SUMMARY
FOR VIDEO HIGHLIGHTS
FOR GAME DAY PHOTOS