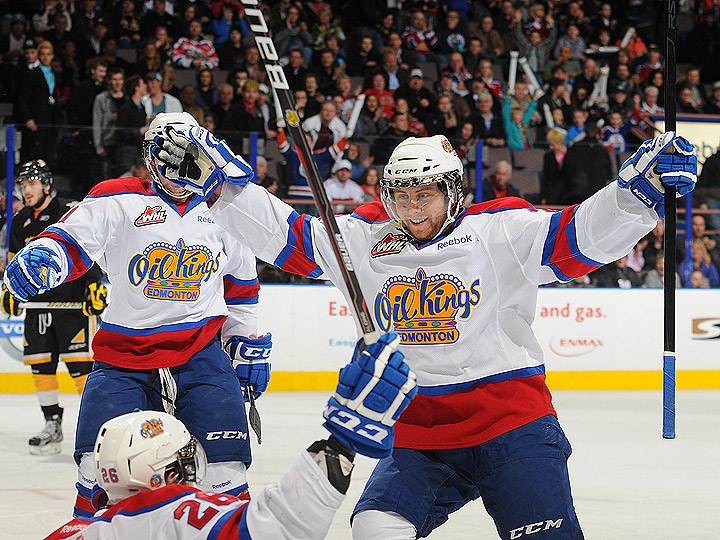 Edmonton, AB – The Edmonton Oil Kings blasted their way to a 2-1 win over the Brandon Wheat Kings on Friday night at Rexall Place. The win gives the Oil Kings a 1-0 lead in their best of seven Eastern Conference Semi Final.

Both teams were returning to action after several days off but the Oil Kings were able to shake the ring rust first. Edmonton Oilers draft pick Kristians Pelss opened the scoring for for the Oil Kings midway through the first. “Captain Latvia” was able to scoop up a rebound off a shot from Tyler Maxwell to tally his second of the 2012 playoffs. The Oil Kings continued to pepper the Wheat Kings net but were unable to capitalize on early chances.

Early in the second Dylan Wruck tallied on the power play for his first of the 2012 Playoffs. Wruck blasted home a feed off a nice play from Martin Gernat on the pinch who tee’d one up for Wruck at the top of the point.

The Oil Kings would carry the 2-0 lead into the second outshooting the Wheaties 34-14. Brandon would finally answer back with a third period goal from Brodie Melnychuk. But Edmonton goaltender Laurent Brossoit and the Oil Kings defense held even through a late third period penalty kill in the dying minutes.

With the win Edmonton extended their current winning streak to an amazing 16 games. Brossoit stood tall in net making 28 saves including some key stops in the third. The Oil Kings special teams showed continued success as the penalty kill held a potent Wheat Kings power play to 0 for 2 on the night. Another huge playoff crowd of 8402 took in the game making it three straight Oil Kings home playoff games with over 8400 fans.

The Oil Kings will take on these very same Brandon Wheat Kings TOMORROW at Rexall Place in Game 2 of this Eastern Conference Semi Final. Game time is set for a special 6PM start time, doors open at 5PM. Tickets are on sale now at oilkings.ca, by calling (780) 414-GOAL (4625) or at the door. The 2012 Oil

Now is the best time to become an Oil Kings Season Seat Holder for 2012-13. Secure your seat for next year with a $100 deposit per seat and the next round of the playoffs are included for FREE.