THE ROAD TO THE 2013 MASTERCARD MEMORIAL CUP 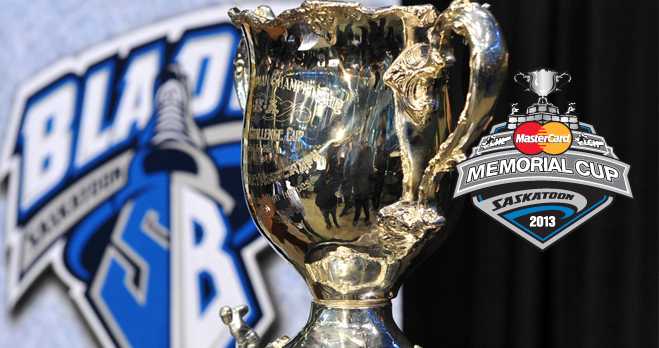 Much is left to be decided as to who will lay claim to the three remaining berths at the tournament, with the WHL, OHL and QMJHL currently playing their respective Championship series’.

Here’s a look at the three CHL League Championship series’, and the battle for the three Memorial Cup berths:

WESTERN HOCKEY LEAGUE
The Edmonton Oil Kings and Portland Winterhawks are currently battling it out in the 2013 WHL Championship series for the right to hoist the Ed Chynoweth Cup and earn the WHL berth in the MasterCard Memorial Cup.

It’s the second consecutive year the two teams have met for the WHL Championship series.

The Winterhawks took a 3-1 lead in the best-of-seven series after edging the Oil Kings 2-1 in Edmonton on Wednesday night, and will aim to lock up the WHL Championship on Friday night at home in Game 5.

Last year, Edmonton defeated Portland in a thrilling seven-game series to win the 2012 WHL Championship.  The Winterhawks are making their third consecutive appearance in the WHL final, having lost both the 2011 and 2012 finals.

ONTARIO HOCKEY LEAGUE
The London Knights and the Barrie Colts are currently in the midst of a heated Ontario Hockey League Championship series for the J. Ross Robertson Cup and the OHL berth in the 2013 MasterCard Memorial Cup tournament.

The Colts find themselves up 3-1 in the series, having downed the Knights in Barrie 6-4 on Wednesday.  Mark Scheifele, a Winnipeg Jets prospect, exploded for four goals and five points in the Colts’ win on Wednesday, giving him 15 goals and 39 points in 19 playoff games.

The Knights are the defending OHL Champs and were the top team during the 2012-13 OHL regular season.  Top 2013 NHL Draft prospect Max Domi leads the Knights in scoring with 27 points in 18 post-season contests.

The Colts can capture the OHL Championship with a win in Game 5 on Friday night in London.

QUEBEC MAJOR JUNIOR HOCKEY LEAGUE
The Halifax Mooseheads and the Baie-Comeau Drakkar are currently engaged in a spirited best-of-seven series for the Quebec Major Junior Hockey League Championship and the QMJHL Champion berth in the 2013 MasterCard Memorial Cup.

The powerhouse Mooseheads, the top-ranked team in the CHL, skated to a 7-4 win over the Drakkar in Baie-Comeau on Wednesday, giving them a 3-1 lead in the best-of-seven Championship series.  Led by the dynamic duo of Nathan MacKinnon and Jonathan Drouin, two of the top prospects for the 2013 NHL Draft, the Mooseheads have plowed their way to a 15-1 record in the 2013 playoffs.

The Drakkar swept through their first two series’ in the QMJHL playoffs, then knocked out Blainsville-Boisbriand in six games in the Semi-Final.  Now, they find themselves down 3-1 in the QMJHL Championship series to the Mooseheads.  Czech forward Petr Straka, who went to the QMJHL final with Rimouski last year, leads the Drakkar in scoring with 11 goals and 25 points in the playoffs.

The Mooseheads have the chance to capture the QMJHL title on home ice in Game 5 on Friday night in Halifax, NS.