MENU
THE WESTERN HOCKEY LEAGUE HAS ANNOUNCED ITS RETURN TO PLAY PROTOCOL FOR THE 2020-21 SEASON
September 19, 2019

As the 2019-20 Western Hockey League’s regular season approaches, two teams will be previewed each day leading up to the start of the regular season, Friday, Sept. 20. Team capsules are presented in order of 2018-19 finish within their own division. Today, we take a look at the Central Division’s Edmonton Oil Kings.

FORWARDS: With Quinn Benjafield and Vince Loschiavo graduating and Trey Fix-Wolansky leaving for the Cleveland Monsters (Columbus Blue Jackets affiliate team), the Edmonton Oil Kings will require their younger 1999 and 2000-born forwards to step up and replace the missing scoring power.

“Up front we lost the majority of our scoring last year with three 20-year-olds and Trey departing, but we really like the young forwards we have and it’s time for them to take the next step in their WHL careers and raise their production,” Hill said.

Include in those asked to fill the shoes of Benjafield, Loschiavo and Fix-Wolansky will be 2020 NHL Draft prospects Jake Neighbours (11G, 13A = 2 points), Vladimir Alistrov (12G, 26A = 38 points) and Carter Souch (10G, 35A = 45 points). With all three players attaining 24, 38 and 45 points in the season; respectively, the Oil Kings will expect to see an offensive increase from each player by five-to-ten points to help make up for the lost scoring power.

After being passed over in the 2019 NHL Draft, Josh Williams (14G, 19A = 33 points) also has strong potential to be picked up in the 2020 NHL Draft and will join Neighbours, Alistrov and Souch on their mission to produce offensively this year.

“Williams was a guy we acquired at the deadline and we still feel he’s got a really strong WHL career ahead of him from our standpoint,” Hill said. “Neighbours was a beast for us in the playoffs last year, as long as he continues to develop and be solid again this year, he will be in good shape. 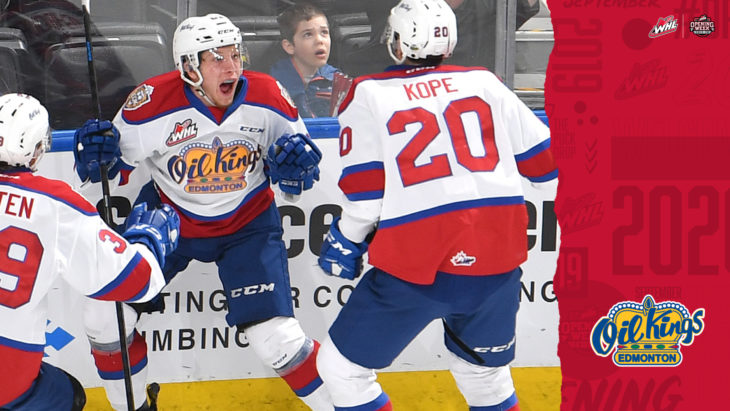 “Vladimir Alistrov, who was our second-overall pick in the Import Draft last year had just under a 40-point season, but him being a second-year player in our league this year and more comfortable playing in North America, will be good.

“Carter Souch is another player who had a great year for us last year and had just over 40 points. These guys have got to step up and take the next step – they are veterans in the league now, not first years so it’s time for them to step in and lead our group.”

Also looking to aid in the offensive power replacement is first-overall selection from the 2018 WHL Bantam Draft, Dylan Guenther. After playing in eight regular-season games, the most of any 2018 WHL Bantam Draft selections, and recording four points (3G, 1A) Guenther set a precedent for himself, proving his ability to jump into a stronger more physical style of play. Be on the lookout for him to go above and beyond the expectations of a 16-year-old player this season and fit right in with the second or even third-year skaters.

DEFENCE: With the majority of their defensive string comprised of veterans, the Oil Kings’ defensive core looks solid. Now a prospect of the New York Rangers after the 2019 NHL Draft, Matthew Robertson (7G, 26A = 33 points) will lead the group once again and continue to provide offensive support from the blueline with his play-making abilities. Also providing stability and guidance on the backend will be 19-year-olds Ethan Cap (5G, 21A = 26 points), Conner McDonald (19G, 31A = 50 points) and Wyatt McLeod (4G, 15A = 19 points). 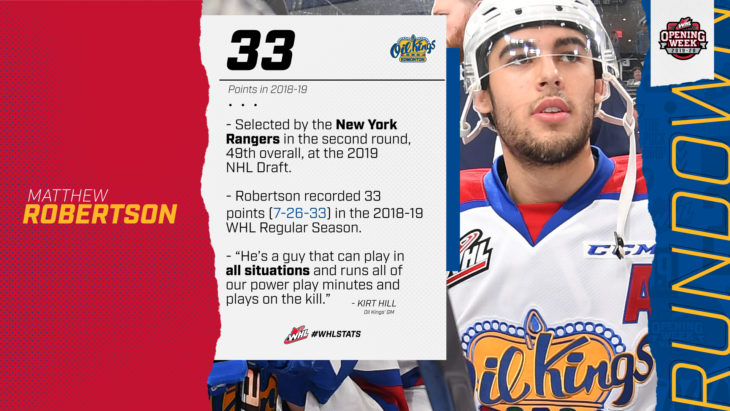 “We’ve got two veterans that are 19 (years old) this year in Ethan Cap and Wyatt McLeod that are attending NHL camps right now, but those guys were really solid right down to the stretch last year,” said Hill. “They are guys who’ve played a lot of games in this league and know how the game really works and what they need to do in that position to be successful.”

Jacson Alexander (3-2-5) is also a promising blueliner for the Oil Kings. Although he was not selected in the 2019 NHL Draft, Alexander will be motivated to prove NHL scouts and teams wrong this year and shoot for a stronger performance.

“Alexander is a guy that we acquired last year in the summer,” Hill said. “He, unfortunately, had an injury last year that kept him out for the majority of the year, but a guy who was a first-round pick in the league and has been a part of Hockey Canada’s Program of Excellence, so he’s a guy that we look to bring into our lineup and also add some more offence.”

“[The defensive] group, with the returning players and as a whole, we are very comfortable with,” Hill said.

GOAL: From a team perspective, the Oil Kings are lucky to have three strong goaltenders battling for their two roster spots; however, it is a difficult decision that the Oil Kings’ management staff has not taken lightly. Dylan Myskiw carried the majority of the goaltending responsibility during the regular season last year, but Todd Scott stepped in and played a big role during the 2019 WHL Playoffs. Last season Myskiw attained a 2.53 goals-against average, .914 save percentage, 28-11-2-3 record and his first career WHL shutout in 45 games. Scott, who played in 17 games, posted a 2.79 GAA, .906 SV%, 11-3-2-0 record and one shutout.

“Right now, we have a bit of a goaltending battle going on, but it’s good competition and it’s good for the group I think,” Hill said.

“Todd Scott was a player that came over prior to my time here in the Davis Koch trade to Vancouver. He had a bad injury in the first half of the year last year and the second half he played in a backup role for us and played a lot of really good minutes. He also ended up having to go in the Medicine Hat series and played really well and ended up getting us through the first round of the playoffs last year. He’s a guy that played well for us when called upon.”

To add to the mix, Sebastian Cossa, the second round, 36th overall selection from the 2017 Bantam Draft, has shown impressive numbers in the pre-season and in the Alberta Midget Hockey League (AMHL) last year. After recording a 1.79 GAA and .940 SV% in his three pre-season wins, the Oil Kings’ goaltending decision became much more difficult.

“Cossa is a former second-round pick of this organization,” Hill said. “He’s played in Fort Saskatchewan, has played in the Hockey Canada program and is a really big guy – he’s 6-foot-6 and a really good prospect that has a lot of will and want to make that next step into our league.”

Regardless of their decision, the Oil Kings should have two strong goaltenders to rely on this season.

PLAYER TO WATCH: As the first-overall selected player in the 2018 WHL Bantam Draft, Guenther not only excelled beyond expectations in his first year of midget hockey, but also at the WHL level.

After his 58-point (32G, 26A) regular-season campaign with the Northern Alberta X-Treme (NAX) Prep team, Guenther was honoured with the CSSHL Freshman of the Year award. The left-winger finished 11th overall among scorers and third among his 2003-born peers in the CSSHL, playing only 28 of 36 games in the season.

He was also called up to play with the Edmonton Oil Kings eight times in the regular season, the most out of any 15-year-old player selected in the 2018 WHL Bantam Draft. Given his development in 2018-19, the Oil Kings are excited to have him join the roster full time this year.

“Any time you’re adding a first-overall pick to your lineup, obviously as an organization, you’re very excited,” Hill said. “His full complete game can strip pucks off players, make passes, make decisions with the play and he’s got a really good nose around the net for not only playmaking, but finding little holes to get himself opportunities to score.

“He’s had a really good pre-season for us here and if that continues he will be another guy we look to for offence here, but as any 16-year-old starting in the league, it’s not an easy league to play in when you are 16 and sometimes you need patience with those guys and they need time to get acclimatized to the league. Obviously [he’s] an exceptional talent and a guy we feel will have success this year, but at the same time, it can be tough sometimes for 16-year-olds, but with him being a first-overall draft pick, hopefully, that transition goes a little bit smoother and happens a little bit quicker.” 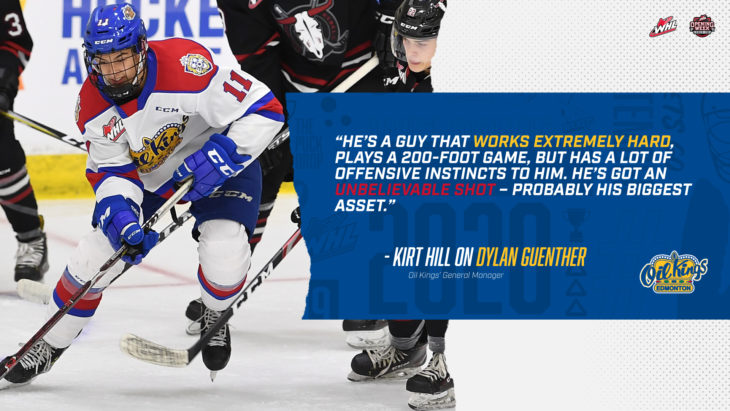 PROGNOSIS: While there’s tough competition in the Central Division this year, Edmonton could be the strongest contender of the division. If the Oil Kings can replace the scoring power of Benjafield, Loschiavo and Fix-Wolansky, they will certainly be a power-house team with a solid defensive core and even stronger goaltending options. Making it to the Eastern Conference Championship Series last year and seriously competing against the Prince Albert Raiders was also a strong indication of the Oil Kings’ strength that will be evident this season.

“I think it’s a really excited group,” Hill said. “As a staff here, we are really fortunate with the guys that we have to work with every day and that they are really eager to learn and get better every day.” 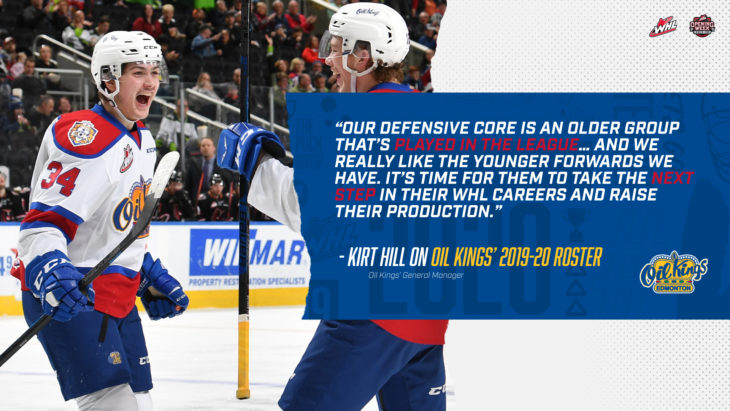