For the second time in four days, the Edmonton Oil Kings and Tri-City Americans have come together on a trade with Wednesday’s of the blockbuster variety.

“We are very excited to have acquired Beck for our group,” said Oil Kings President of Hockey Operations and General Manager, Kirt Hill. “Beck is an elite goalie in our League and such a quality individual both on and off the ice.

“The Warm family has been a part of our organization in the past, and we are extremely proud to welcome them back.”

“It is hard to see Beck go, as he was the consummate Tri-City American,” said Americans General Manager Bob Tory. “However, our season has dictated that we need to address the future.

“We wish Beck nothing but the best moving forward.”

Originally a listed prospect of the Americans, the 6-foot-0, 172-pound Warm has established himself as one of the league’s most reliable goaltenders since entering the league. Through 28 games this season, Warm has compiled a 9-14-3-1 record, 3.40 goals-against average, 0.914 save percentage, and two shutouts. His most recent clean sheet came via a 48-save shutout against the Oil Kings on November 11, 2019 in Edmonton.

Warm will link up with former teammates Samuel Stewart and Riley Sawchuk in Alberta’s provincial capital.

Heading the other way in the deal is Gylander and Littler, providing strength on the team’s horizon.

Gylander is a prospect of the Detroit Red Wings currently playing in the Alberta Junior Hockey League for the Sherwood Park Crusaders. In 21 games this season, Gylander has a 20-1-0-0 record, 1.99 GAA, 0.927 SV%, and one shutout. The 6-foot-5, 179-pound product of Beaumont, Alta. was selected in the seventh round, 191st overall, by the Red Wings at the 2019 NHL Draft.

Also heading to the Americans is Littler, a 6-foot-1, 187-pound product of East Wenatchee, Wash. In eight games with the Wenatchee Wilderness 16U this season, he recorded 14 points (6G-8A). The Oil Kings chose Littler in the 10th round, 199th overall of the 2019 WHL Bantam Draft.

The Oil Kings are in action next on Wednesday, January 1 (2:00 p.m. MT) when they play host to the Everett Silvertips. 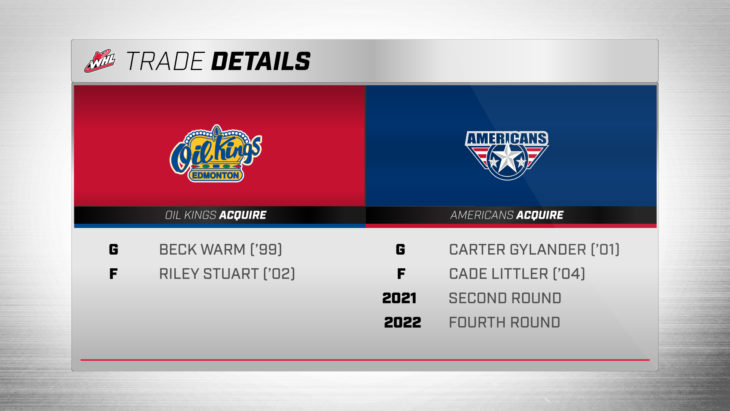 The Americans have traded 20-year-old goaltender Beck Warm to Edmonton for two players and two picks.