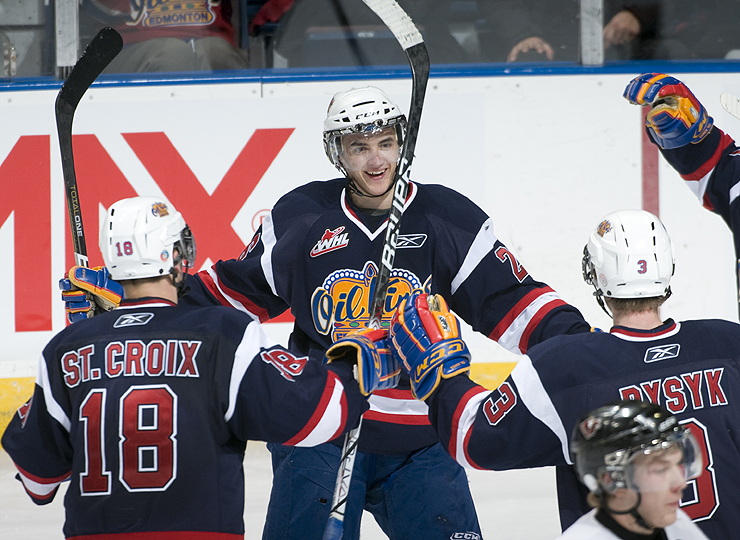 Edmonton, AB – The Edmonton Oil Kings continued their third period dominance over their opponents this season as they scored five times in the final 20 minutes to come from behind and beat the provincial rival Calgary Hitmen 8-5 in a wild Wednesday affair at Rexall Place.

The Oil Kings outscored the Hitmen 5-1 in Wednesday’s final frame to earn the important three-goal victory, and they’ve now outscored their opponents by an impressive 87-65 margin during third periods this season.

Trailing 4-3 after 40 minutes, Edmonton got goals from Colton Stephenson, Dylan Wruck, Adrian Van de Mosselaer, Kristians Pelss and an empty-netter from Travis Ewanyk in the final 20 to give them the win.

Oil Kings captain and defenceman Mark Pysyk led the charge in the big victory, as the 2010 Buffalo Sabres first-round draft pick scored once and added three assists, while Wruck also tallied a goal and three helpers to give him 68 points on the year — the top single-season point total in the Oil Kings’ modern franchise history.

Michael St. Croix isn’t far behind Wruck’s total, as he chipped in with three assists on Wednesday to give him 64 points on the season and 112 in his career, putting him just six points away from setting a new modern franchise all-time points record. And not to be outdone on the night was Pelss, as he scored a pair of goals in front of his family, who traveled all the way from Latvia to visit the Edmonton Oilers 2010 draft pick.

Wednesday’s 8-5 victory combined with the Brandon Wheat Kings’ 7-4 loss to the Saskatoon Blades means the Oil Kings now have a three-point cushion in sixth place in the Eastern Conference with a 27-27-2-5 record for 61 points. Brandon sits in seventh with 58 points while the Prince Albert Raiders were idle on Wednesday and hold down eighth with 55 points.

Next up for the Oil Kings is a home-and-home with the Lethbridge Hurricanes this weekend, starting Friday in Lethbridge. Saturday’s game is back at Rexall Place at 7 p.m., and it’s 80’s Night with 80’s concession prices – 50% off all food and beverages! There will also be free Oil Kings retro headbands for the first 1,000 fans in the building, plenty of 80’s prizes to be won and an 80’s cover band performing on the ATB Financial stage.